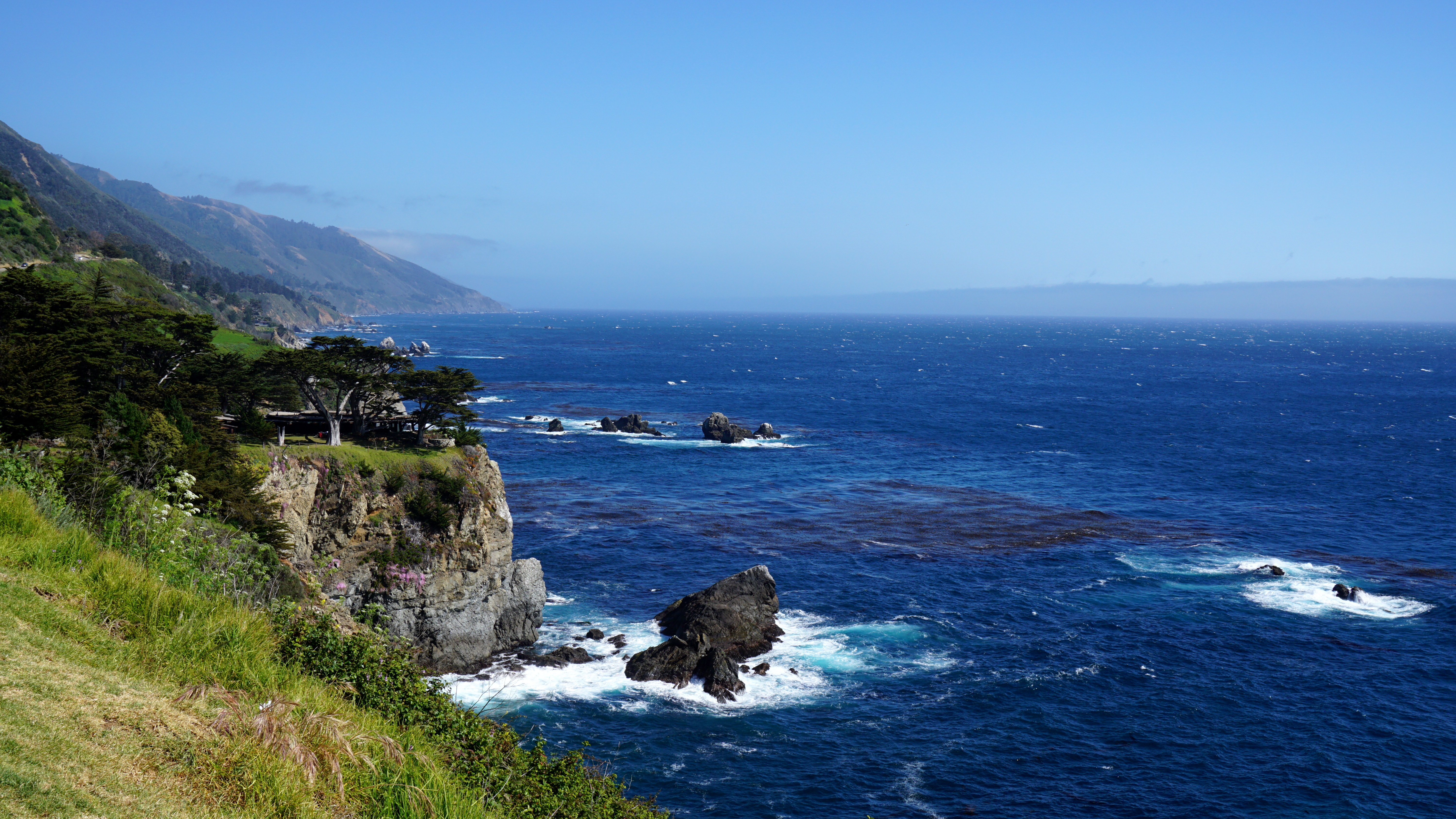 After a few amazing but though days in Yosemite, we went back to the coast and drove down to Santa Cruz. We only visited the beach area and the beach boardwalk, but it is a place you can spend many hours on a nice sunny day like we had. There is an amusement park on the beach, tonnes of small stalls and an arcade hall, where I by the way beat up Andrew in a lot of games. I was comfortable with Guitar Hero obviously, but did you know that Time Crisis is now on version 5!? The last version a played was the second one and it was for PlayStation 1. Anyway, we took time to just lie on the beach, before continuing south the next day. 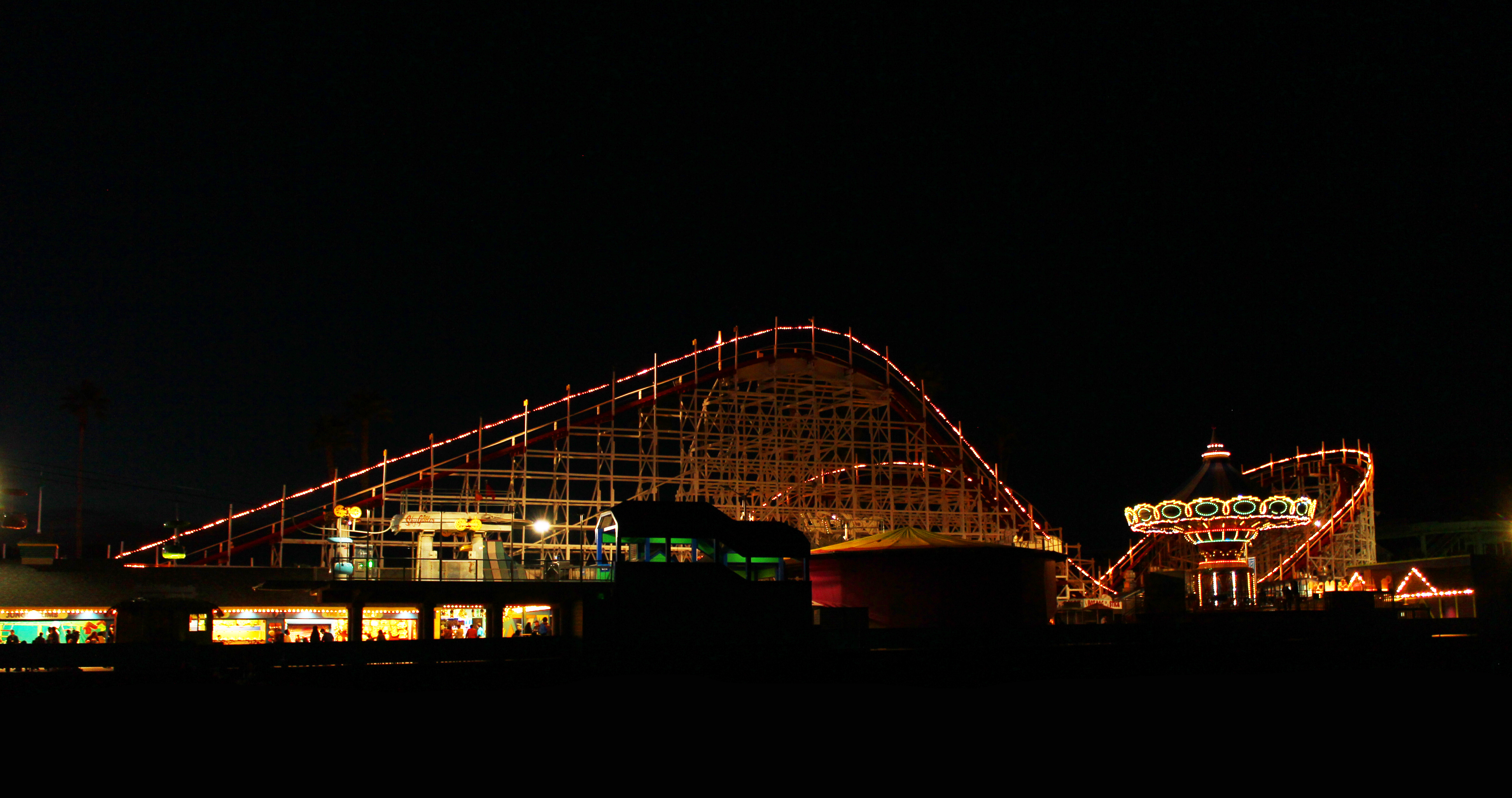 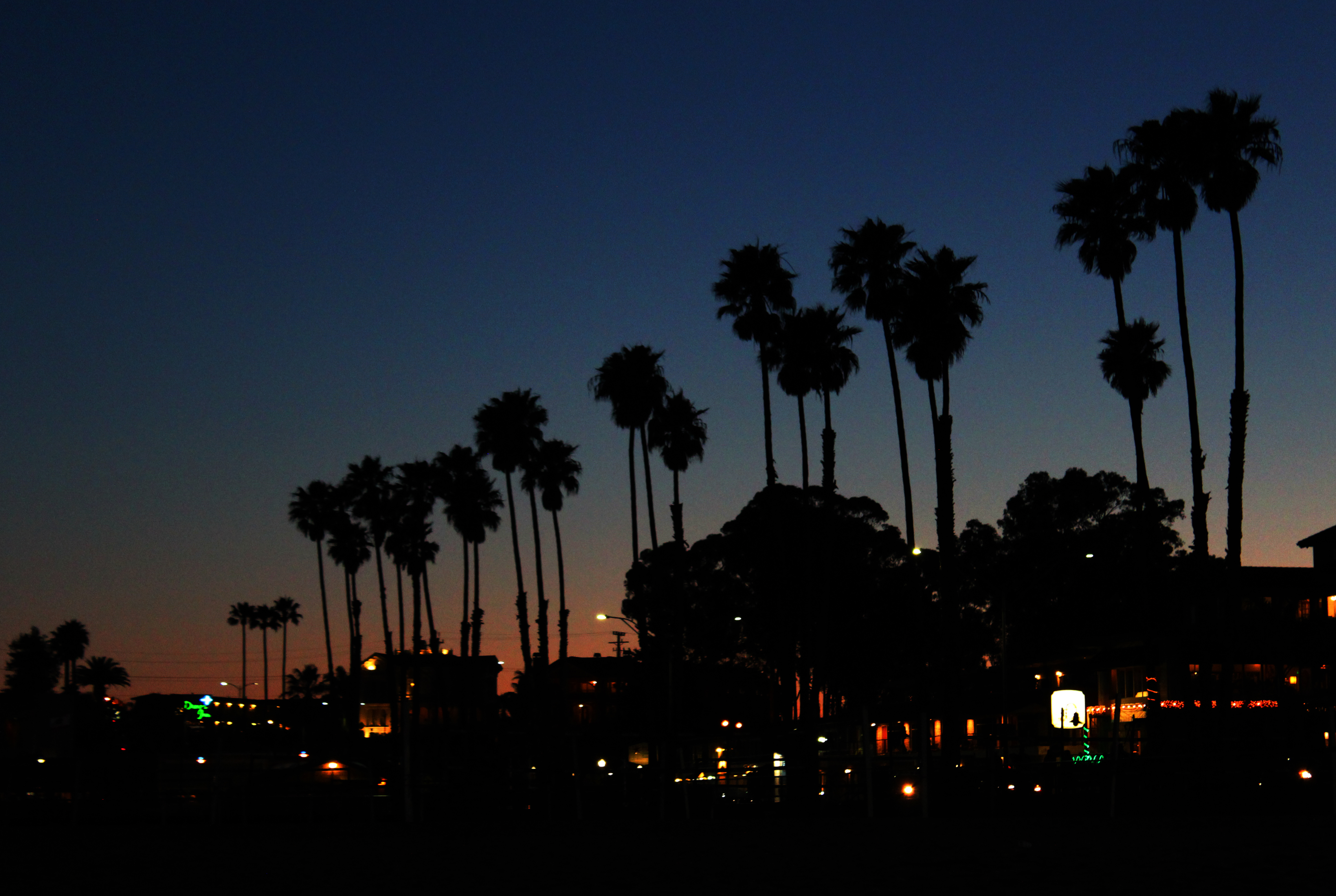 We went along the coast as much as we could, and did our first stop in Carmel-by-the-Sea. Here we had breakfast at a little café, while trying to wake up properly, after one entire night listening to the neighbors having wild sex. It was a cozy little town, with many small houses right down on the beach. From here we went to Point Lobos, and went for a little walk. To be honest, the nature did not exactly impress us, as nothing can compare to Yosemite, but it was a nice area though. However, we did get to see a few seals and sea lions and we think we also saw a whale – or at least the tail, before it submerged.

Next stop was Pfeiffer State Park, where we went for a little walk. Like Point Lobos it was not super interesting, as the waterfalls was about 100 meters smaller than the ones we saw in Yosemite. On the other hand we saw lots of animals, including a mockingbird (we think), lizards, a snake and deer. 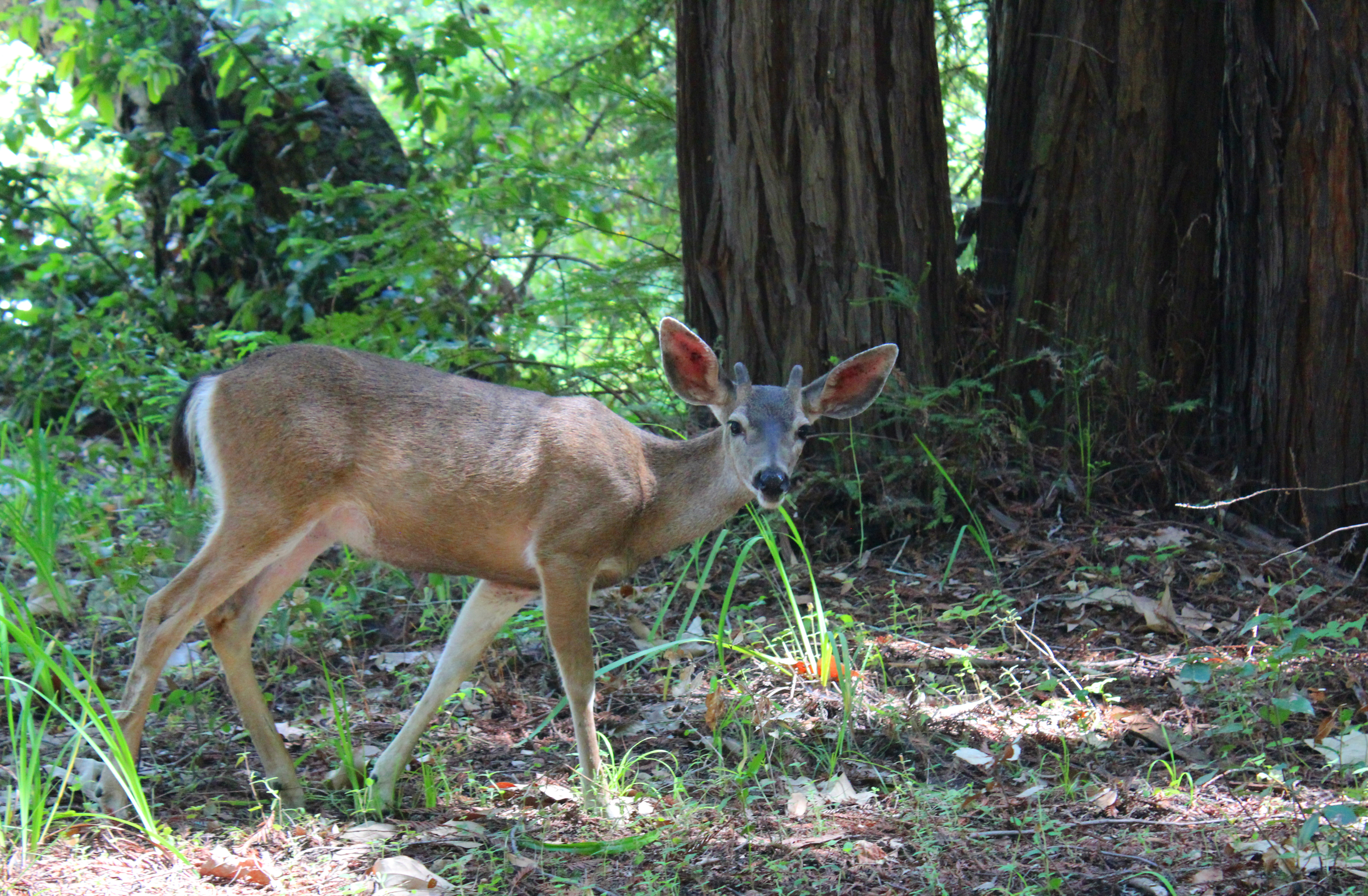 We tried going to Pfeiffer State Beach, but the parking lot was full, so we skipped it and went straight to McWay Falls. That on the other hand was a beautiful area with cliffs, and the clear blue Pacific Ocean. There had been a major land/rock slide nearby, that completely altered the coast line in that area. They had posted before and after images, so you could see the difference. Before arriving in San Luis Obispo we made a brief stop at Piedras Blancas Elephant Seal Rookery. Here dozens of elephant seals is lying on the beach – unfortunately only to moult at the time of year. 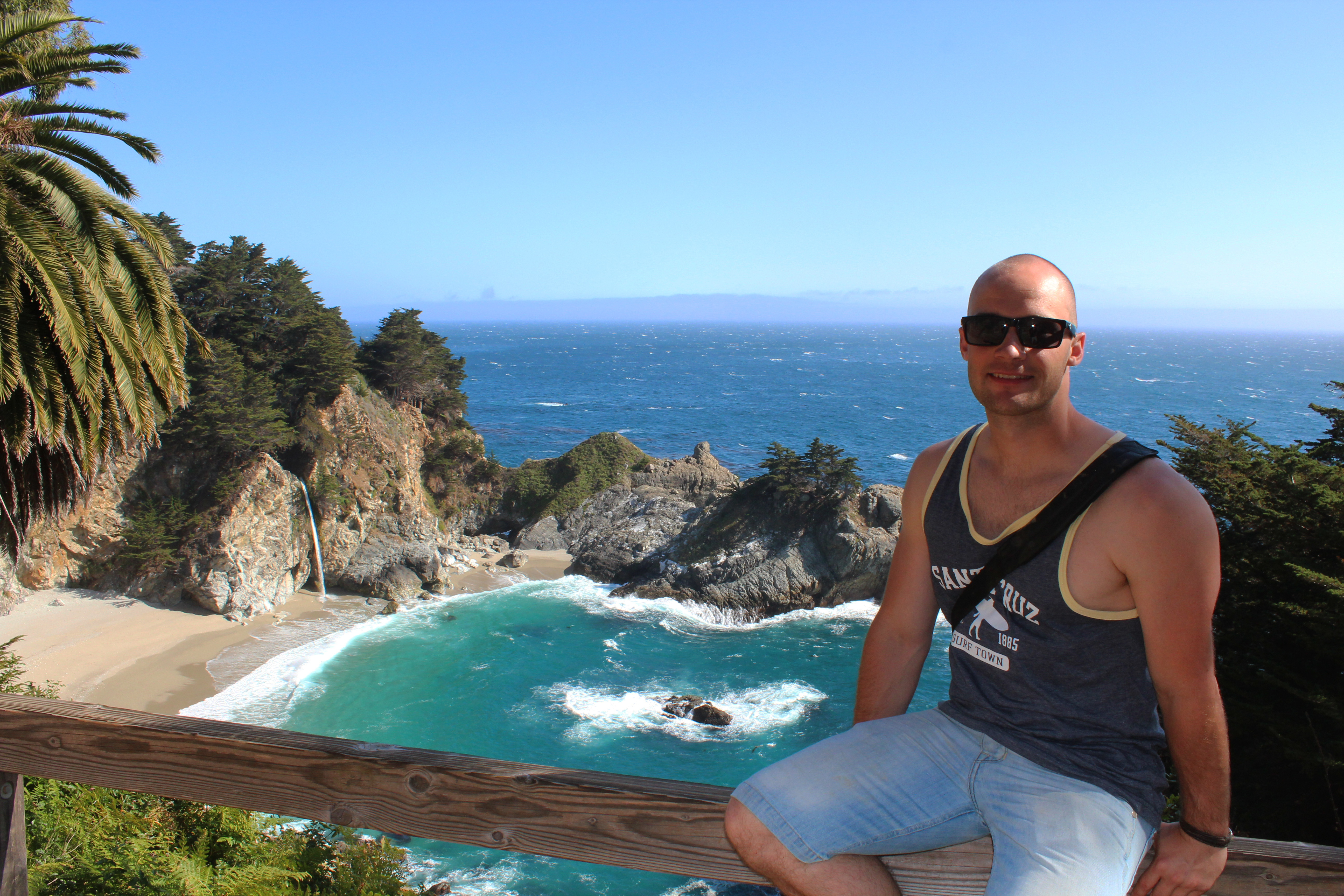 We moved on south the next day. Before leaving town, we stopped at Bubble Gum Alley, which was basically the same as Bubble Gum Wall in Seattle but bigger. From here we went on to 1000 Steps Beach in Santa Barbara. It wasn’t quite 1000 steps to the beach, but more like 150, but none the less a nice walk on the beach to the city. Santa Barbara is a lovely city with the classic Californian beaches, beachvolley and a wooden pier stretching far into the water filled with stalls and fish restaurants. The city is clearly a former Spanish colony, which the architecture reveals, especially in the old court house, where the entire room is filled with murals telling the story of Santa Barbara.
The day was getting really long, and after two weeks with so much to see, we were getting tired. We had a quick stop El Matador Beach, and then went straight for our hostel in Santa Monica, LA.

Also we came by a field, where some guy had zebras….

Come back soon for my adventures in Los Angeles. I am currently on my way to Hawaii, which will probably be the last chapter – I am starting to look forward to coming home.