This is the second part of Los Angeles. Read part 1 here.

Funny thing about LA; unlike many other cities, you never hear about downtown. It is always Hollywood, Beverly Hills and Santa Monica. Downtown is actually not bad, and not as crowded as it sounds. We came by Public Library and stepped in. It was enormous, and it had a free exhibition about propaganda i Nazi Germany before the Second World War. We took a look and ended up walking around there for an hour – it’s was very interesting, and with a slightly different theme than usual. The timeline started all the way back before we even heard of Hitler, and ended before the war started. It focused mainly on how Hitler gained power, and made his insane ideology reality. Anyway, Andrew wanted to see Chinatown (obviously), and as I hadn’t much more on my agenda I tagged along. It was not a big Chinatown, but somehow less tacky or cheesy than some chinatowns are.I also recommend checking out The Bradbury Building – an active office building from 1893, that have also set the scene for a few movies including Blade Runner. It’s free to enter to see the remarkable Italian renaissance style hall. I google that – I don’t know such stuff, but it is beautiful. 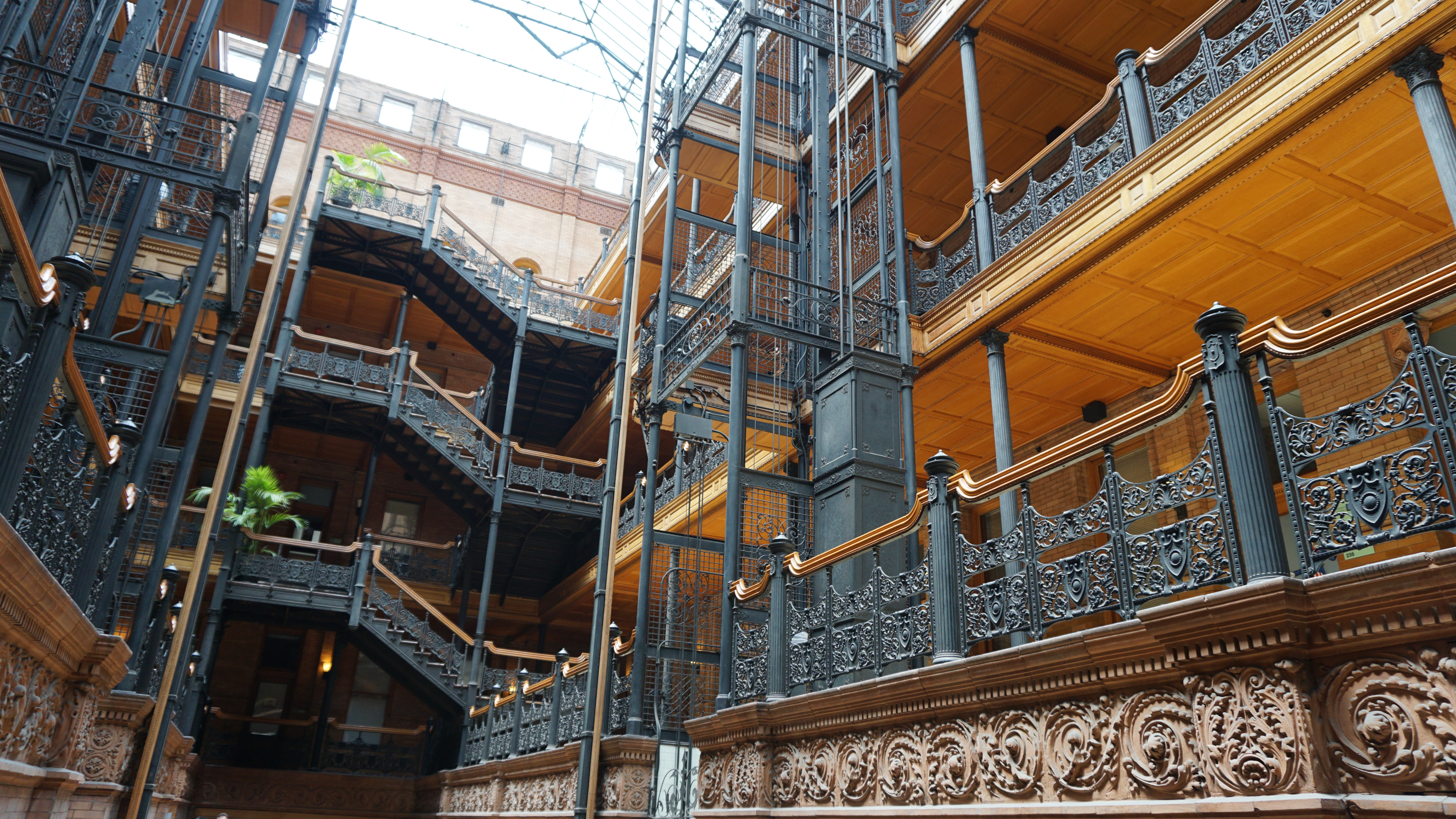 Enough sightseeing! Sunday was a day of action! We jumped on the hostels shuttle bus to Six Flags Magic Mountain! In contrast to Universal Studios and Disneyland it did not have many pretty themes etc. They didn’t even try a little, they just wanted roller coasters. That’s why they are a world wide franchise known for their rollerc oasters. I realized right away, that I even recognized one of them from Discovery Channel: This is promising! We went with a German named Vincent. We met him on the bus on our way out. The queues there was endless, which was a bit of a shame: Every time we got of a ride, we were pretty high, but then it was back to waiting. But the day was amazing, and the rides were the best I have even ridden. I started writing a little here, but it got out of hand, and Six Flags Magic Mountain got its own post. 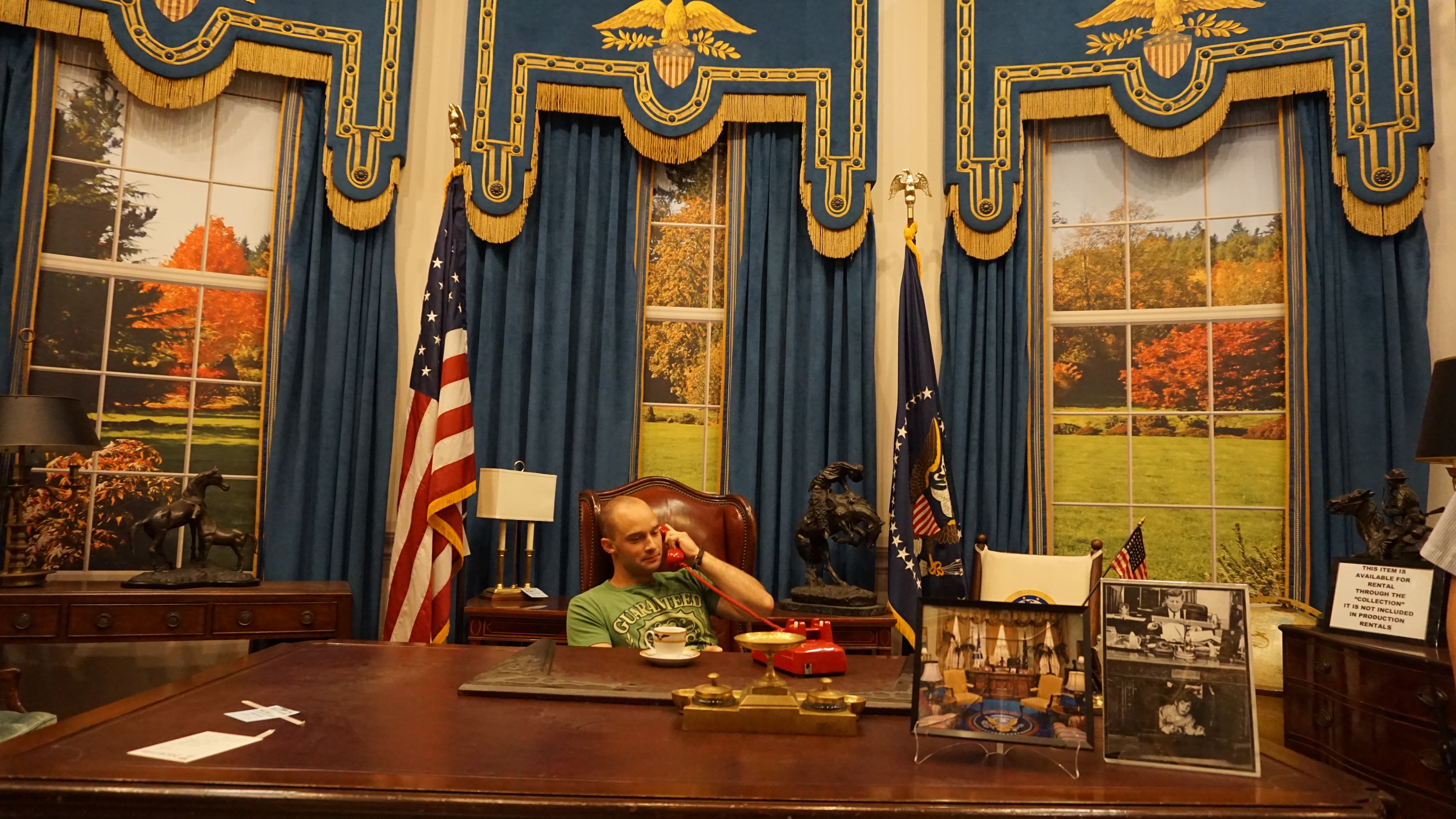 We went to Warner Brothers Studios. It was a bit more low key than Universal Studios, with no rides or cinemas, but we felt we got a little closer. Warner Brothers provided the studios for TV-shows such as Friends, Two and a Half Men. The sets have been cleared to make room for new shows, but they have saved some of it for their visitors. We went inside the Central Perk café from Friends and Walden Schmidts (previously Charlie Harpers) living room from Two and a Half Men.

One of my favorite shows, The Big Bang Theory, are still being produced there. Unfortunately we weren’t allowed to take photos, but it was great having a look into Sheldon and Leonards living room, the hall (which is just one floor, with changing requisites), Howard and Bernadettes kitchen and Leonards bedroom. All the rooms are set in front of a live audience, and can be taken down or put up when they need it. They are a lot smaller than they look on TV, and seems messy as there are so many obstacles all over them. 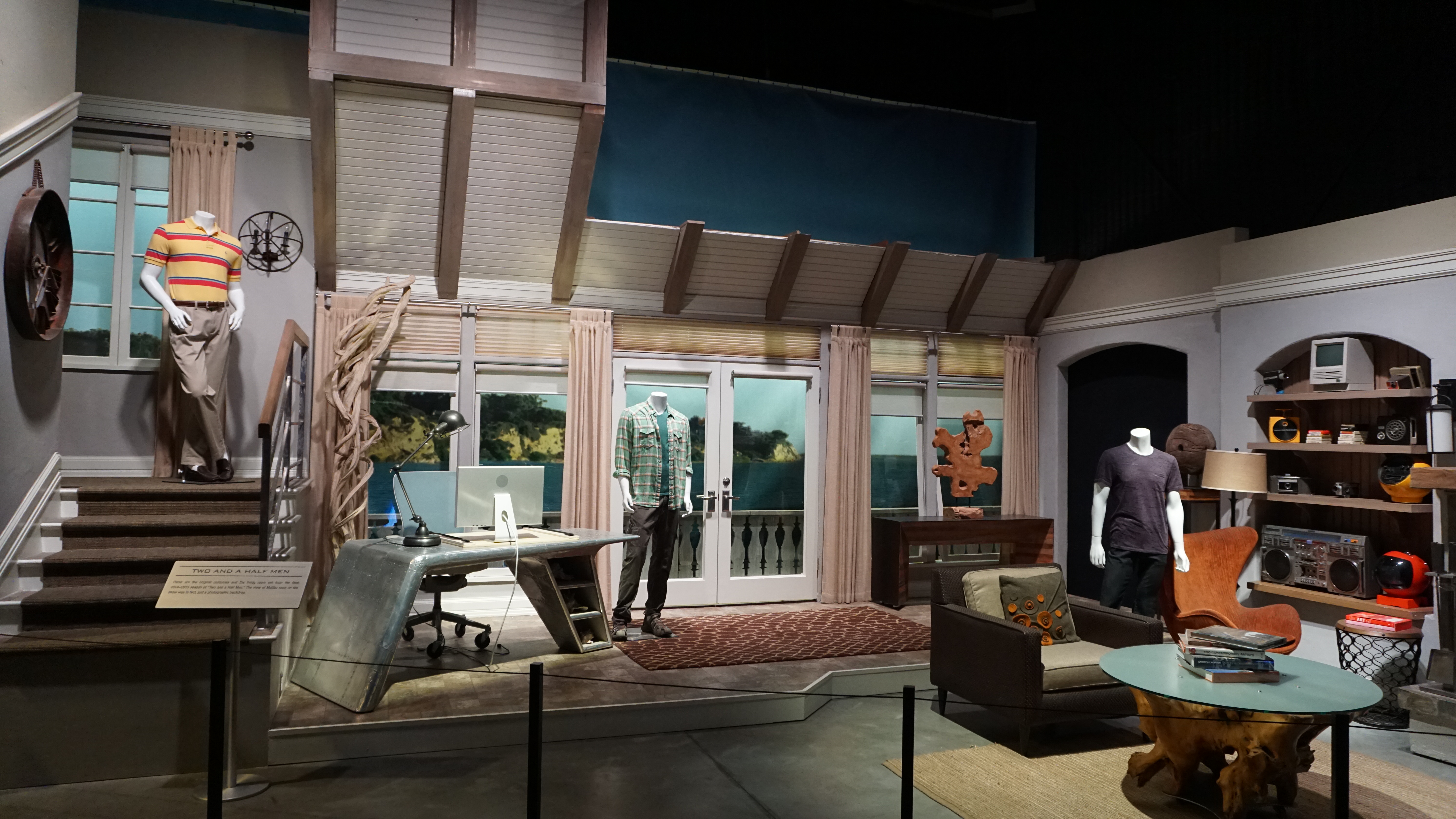 Compared to Universal Studios, they cared more about how the things actually work. They showed us their bush wagons used to cover things in the background, forced perspective to make people look like giants (or hobbits) and green screens to make Harry Potter fly on his Broom. “Yep, everything is fake in Hollywood. Sorry guys!” our guide told us. It is impressing how they make a random street corner in their town act as a spot in the massive Central Park, or the park where the guys from The Big Bang Theory is participating Kite Wars. Or their big glass facade building playing the role as multiple airports and a hospital. It is all about the context and a few details. They also showed us where they keep props, costumes and build sets. 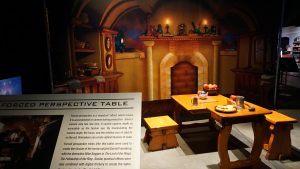 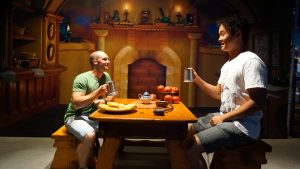 After the tour at Warner Brothers Studios we went back to Hollywood Boulevard, and got a tour at Dolby Theatre. This is where the Oscars are held every year, block the entire street for a week and cover the stores’s signs so everything looks glamorous. It was very interesting to see how it all works, and hear all the details. The stage is gigantic, and many of the hallways and backstage areas are normally just storage space or plain gray hallways with pipes. This is the green room at The Oscars:

We bought ourselves a “Go Los Angeles” card, that gave us acces to a bunch of experiences in 3 days, so we thought we would maximize its value, and went on a Beverly Hills bus tour. It wasn’t really my thing. We spotted a lot of houses belonging to celebrities that I hadn’t head of, but it took us around a large portion of the city. It was cool seeing the house from The Fresh Prince of Bel Air though. Other than that we saw the houses of Charlie Sheen, Cher (that by the way costs 50 million dollars), Ronald Reagan, Johnny Weissmuller and Van Halen.

Our last night in Los Angeles and Hollywood was spent in a limo with some people from our hostel. We rode from bar to bar in the limo. The first bar had a rodeo bull. First round was a rehearsal and the second was the qualifier to the final. You needed to either face the bull and the highest intensity or stay on it for 15 seconds at medium difficulty. Most of us went for hard, and were thrown right off – myself including. The finale was not as wild, but was backwards and blindfolded. The first finalist made it for 15,4 seconds, and no one was able to beat it… before I had a go. I had a good feeling, and was hanging over the side while trying to hold on with my legs. 15,9 seconds, and then the limo was leaving. So I never got the official result, but rumors had it, that some girl beat me – it is not confirmed however! We moved on to the next bar, and ended our stay in The City of Angels but manner. The next day we drove of to Las Vegas with John and Conan, with whom we shared a room in Hollywood.

Yup, I edited the images myself. They created a video for purchased, but it was 40 dollars or so.

The last picture is a subway. Of course it is just a hole in the ground, where they hire a bunch of people to walk up, change clothes and go back down and so on, so it looks like there was a lot of people. The extras with nice cars, is asked to drive around in the streets.