Yosemite is probably the most beautiful place on earth I have visited so far, and we didn’t hesitate to book an extra night there. We drove from San Francisco in the morning after getting our car. It was a pretty great ride through the wilderness up the crooked mountain roads. It wasn’t easy finding accommodation two days in advance, so we ended up in Sonora about an hour 45 minutes from Yosemite Valley. It was allright, cause we had our own room, two king beds and an outdoor pool. The ride back in the evening through the hairpin turns in the mountains in pitch black darkness was pretty tough though.

We arrived in Yosemite around four o’clock, and went for a short hike to Upper Yosemite Falls. It was about 5-6 km each way from about 1200 meters to 2000 meters, and it was a bit longer than we expected. We met a couple on the way up. They said you should plan with 6 hours for the hike, and they did not expect to reach the summit. They made room for us to overtake them, and we continued while constantly estimating our time of arrival back in the valley. We needed just 3:20 including a few photo breaks; mainly at the summit. The mountains in Yosemite are rough and steeper than what we knew from Whistler. They are basically vertical in many areas. That meant that you could look over the edge and a few hundred meters down many places – an entirely different feeling of being up high that in the ski resorts I have been in. We checked in at hour hostel around 10 pm and left again the next morning at 7:30.

Day 2 was really hard on our legs and feet, and the last few kilometers from the end of our hike to the car was unbearable. Yosemite almost killed us both. We started our trip towards Glacier Point (2199 m) and Sentinel Dome (2476), and already stopped after just a few km when Andy said “Stop! There is a bear!”. It took me forever to spot it, but I guess I did not expect to see it right in front of me on the path. There is was, a tiny bear cub.

A few hours and 6,8 km later we could enjoy the view and our lunch at Glacier Point. There were many squirrels trying to charm people into offering them a bite of their lunch. We talked to a group with two girls and their mothers, who had planned the same route as us, and wanted us to take their picture. They would skip Sentinel Dome along with the 3,9 km and 250 height meters it included. 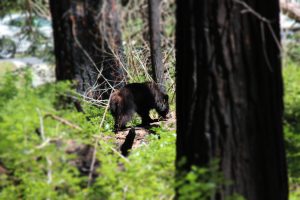 Of course we couldn’t help thinking if we could do Sentinel Dome and then catch up with then on the way down. It seemed like a long shot, but we did overtake a lot of people the day before, and it was a full 13,2 km from Glacier Point to the valley. At the top of Sentinel Dome we had a full 360 degrees view almost as far as the eye can see. There was even a bit of snow.

About half way down we crossed a massive waterfall, where you could go all the way out to the edge of both the river and the cliff if you dared. We met that same couple we talked to the day before. From this point it was pretty much downhill all the way, and much of it was steep uneven steps. The pace was slow and it was really rough on the knees. We came by another enormous waterfall, and even though we were quite far, it felt like it was raining all the time – mostly on one side of the body though.

Once we came down, and had to step off to the side to… you know. I almost peed on a deer. I found a good tree, when I heard something move on the other side. I looked and there was a deer just in front of me, barely bothered by my presence. In general we did see a lot of deer and lizards that day.

The hike was approximately 30 km, so we were a bit tired the next day. Once we managed to get out of bed, we went for a short hike (a couple of hours) to see the giant sequoia trees. One had fallen and was hallow, so we could walk right through it. Another was still standing, but had a path right through it. We came back early, and spent the planning and booking until we would arrive in Los Angeles.

So did we overtake the girls?
Of course we did! About half way down (their route) we met them again, and they were pretty impressed we were already there (10 points!).

Here is a few extra photos. They really don’t do justice to the beauty of Yosemite.