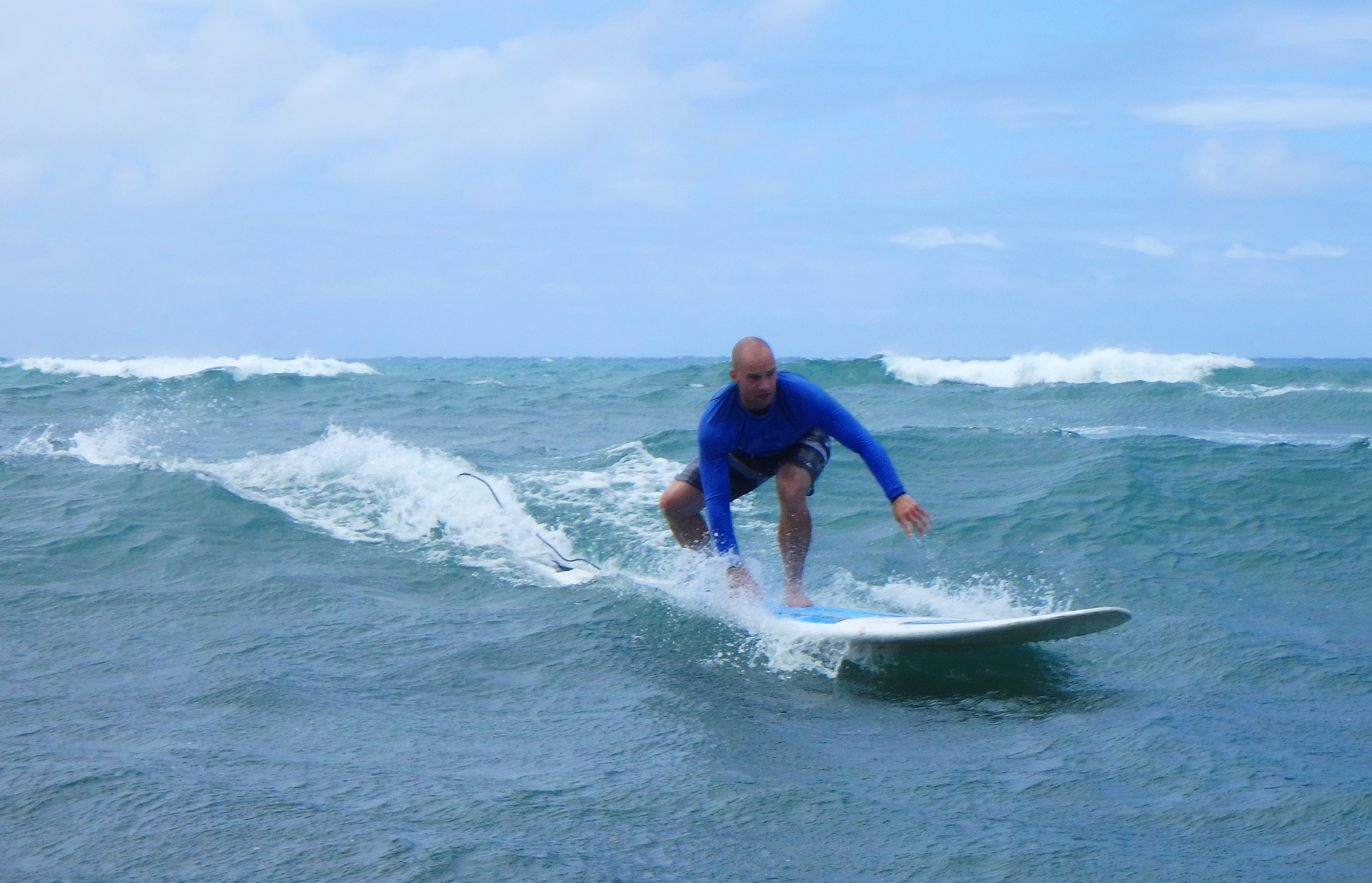 The airport in Honolulu (Oahu, Hawaii) is a bit odd, and has multiple open and outdoor areas, so it didn’t take os long to notice, that even though the temperature was lower than in Nevada, it was still very warm and humid. We were a bit delayed, and spent the evening checking in to our hostel, get dinner and shop for lunch to the next couple of days.
As mentioned earlier I had been missing the rain for months time. That desire was fulfilled soon, as it was pouring down as we walked towards the waterfall Manoa Falls. We made good use of having a car, and drove around to some different places. Unfortunately we killed a bird, that flew straight out of the woods and directly beneath the car.
The next day we went to Koko Head Crater – a hike up an abandoned railroad. The hike was just 20-30 minutes, but was great and with big steep steps, so it was an intense hike in high temperatures. The tracks are completely straight from the very bottom to the top, so we could see where we were heading and had a great view to the bottom whenever we took a break. At the summit we had a great view over the southeast part of the island. Andrew took a lot of the trip in a light run, while I took it more easy to spare my knees. Turned out to be a good decision, as he complained a bit over sore thighs the next day. As it wasn’t a long hike, we drove around on the east coast, and stopped at a lot of lookouts along the way. At Halona Blowhole Lookout we could walk on the cliffs and see the ocean below. There was an incredible force in the water, even though the waves were relatively small. They were redirected by the rocks everywhere, and when the came in the right way, the splashed all they way up onto the cliffs 5-10 meters above the sea. 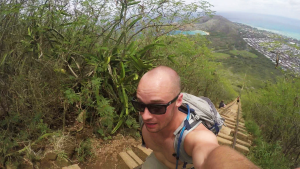 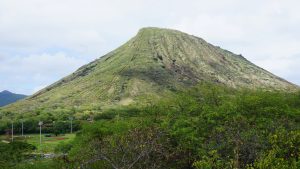 After exploring the east coast, we went to the north coast the next day. We went by Turtle Beach, that (unlike Sharks Cove fortunately) lived up to its name. We weren’t in the water, but we could see at least 6 large sea turtles poke their heads through the surface of the water. We continued to Waimea Valley, where we went into the water for the first time, and splashed around under a waterfall for a few hours. 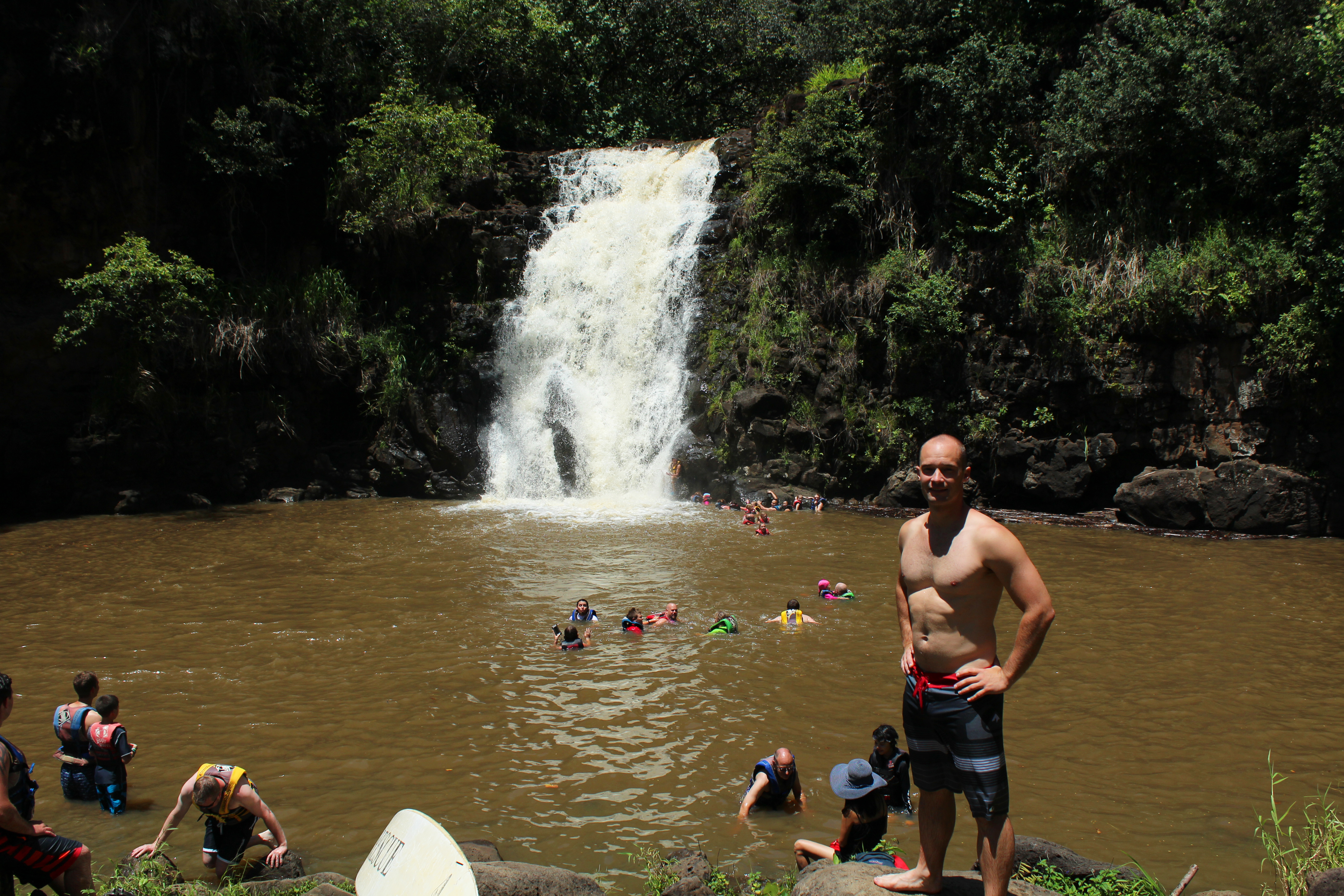 It was 1½-2 km through botanic garden from the entrance to the waterfall. Not so fun fact: 50 % of the Hawaiian plant life is either extremely rare or endangered due to the Europeans’s arrival with goat, livestock and sheep. Halfway through the garden was a little area with old Polynesian games. The had a fun one similar to Checkers. It wasn’t about taking most pieces however, but about making the last move. 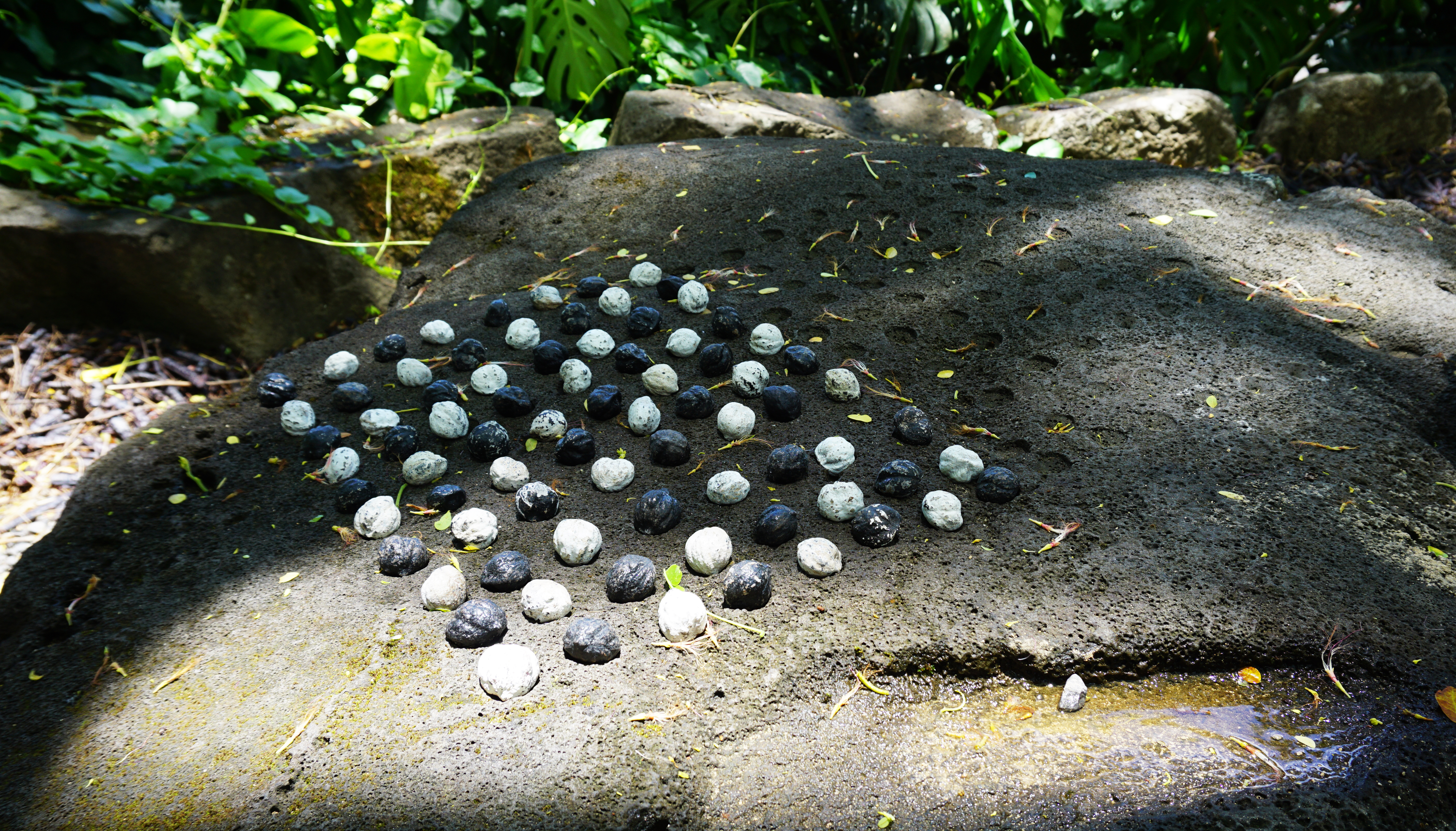 I actually liked it better than Checkers, cause it didn’t require the aggressive eating of the opponents pieces, but instead think a little further. We ended the day at Sunset Beach and got in the water again. We were two overgrown children when we found out how big the waves were. We came up with a little game, where we stood in the surf, and tried to stand still when the wave came in. If we made it, we took a step further, until one of us fell over or got flushed out.

In the evening we did a little research on our dream hike on Haiku Stairs (Stairway to Heaven), but postponed it due to the weather forecast and went to Pearl Harbour instead. They after that we tried Haiku Stairs, but had to give up the attempt. The area is closed, and it is illegal to go there even though around 30 people do the hike everyday anyway.  So we weren’t completely comfortable with the combination of 2 police cars in the area when we got there, a neighbour shouting at us and filming us, another police car inside the area and a helicopter hovering over the area. We went out and headed for Diamond Head Crater instead.

We checked in at a new hostel, and shared a room with two Australians, who also had a close friend who had been in Whistler. Her name was Hannah, and when I guessed her last name, and told her we used to work together, we were all a bit stoked. The world is a small place… The hostel had snorkeling gear for rent, so we grabbed a set and went to Hanauma Bay and splashed around between the fish, corals and sea urchins. The water was extremely salty, which made floating very easy and effortless, but the water tasted awful. At the same time the sun was very strong, so we got quite burned and slept on our fronts for a few days. 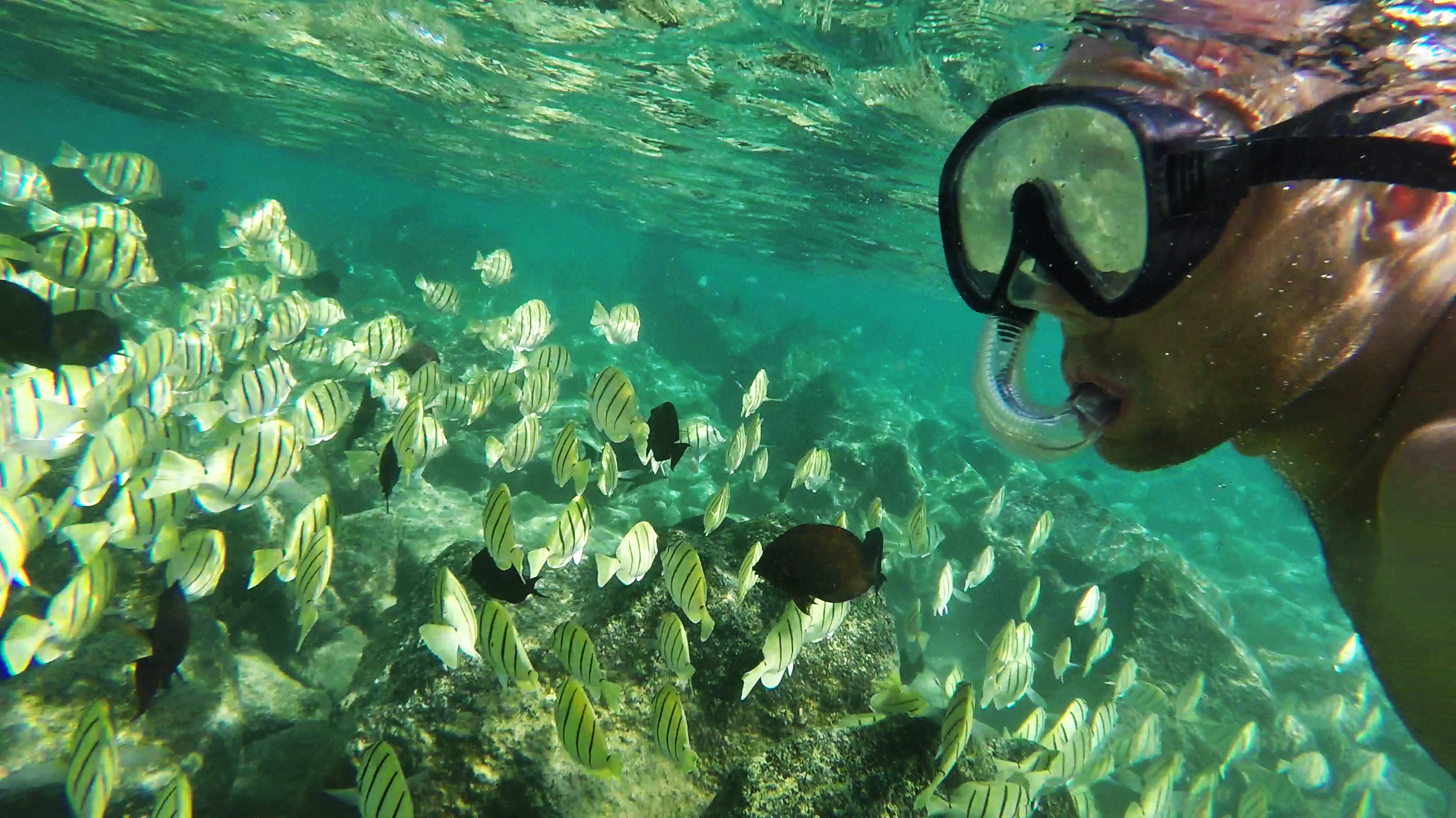 The hostel served dinner and the roof terrace that night, and it ended with a night out with a bunch of people that stayed at the hostel. Tiredness won the next day, so we got together and went to the beach to relax. We now had a lot of acquaintances in Hawaii, which just made our stay even better. Most nights were spent at the roof, enjoying a few beers with the others. 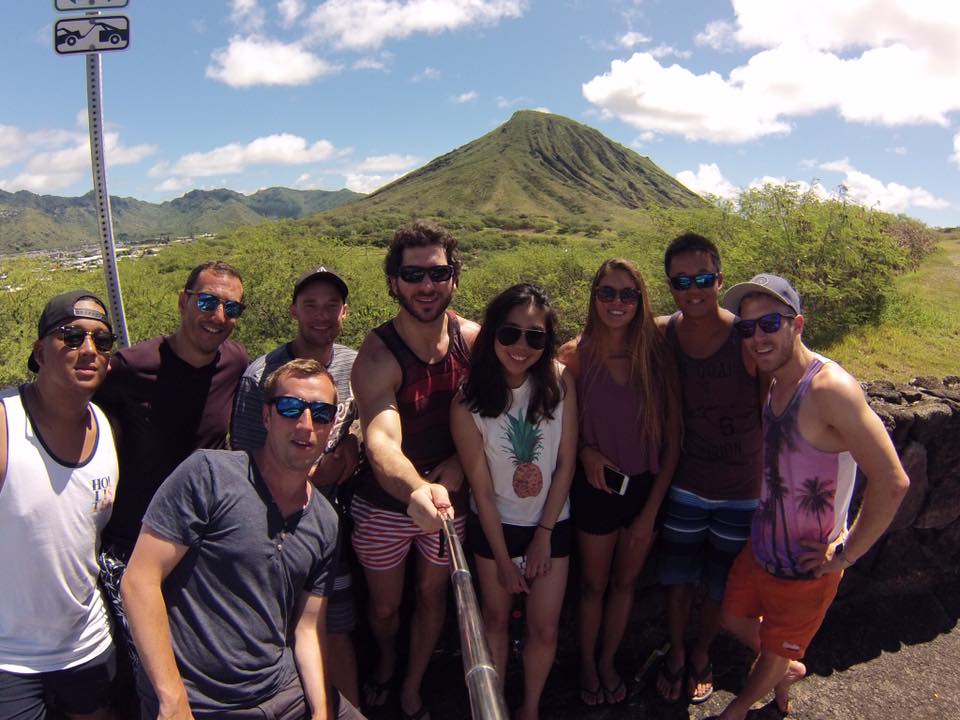 We invited the Aussie, Jack, on a hike one day, and it was probably the best and mist diffucult hike I had ever been on. The area was called Ka’au Crater, and the hike was just about 8-10 km but took us about 6 hours anyway. The area is in the middle of the island, so it rains very often and was very muddy. I did the first crash, when my supporting leg disappeared to the right, and I went straight down on my left side. Once the crash tap was open, I wasn’t long before Jack went down twice, when his lower body went over the side and into the brushwood, while he fought his way back up to the path using only his arms. After half an hour we came to the first of 3 waterfalls, and we changed to our swimming trunks and swam under the waterfall. The next two waterfalls wasn’t quite vertical, and had ropes along the sides to help you get up. The “hiking trail” continued along the waterfalls and even crossed over at one point. When we got above the trees, we could see down into the old crater on the entire one side of the Island. It was just like Jurassic Park (which does have a bunch of scenes from Hawaii) with large deserted plains with vigorous mountainsides. The higher we came the denser the clouds and the more slippery the mud became. Soon we could only the se rim on which we were walking, and a few meters down the hillsides on both sides – everything else was white. 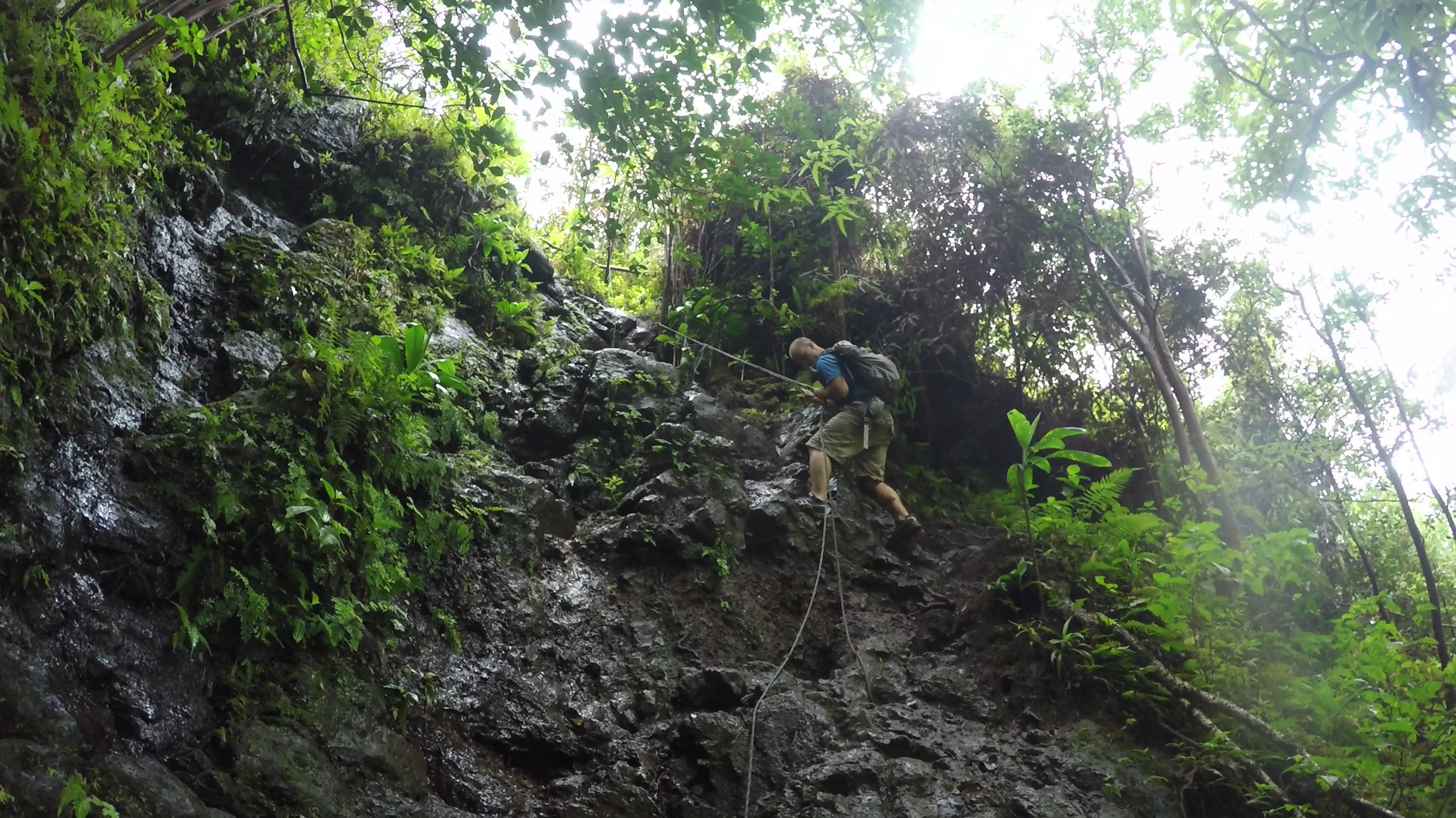 Close to the top we met a couple. They had turned back, as they could not get over the last bits. We figured that we could, but understood why they had trouble. There was a long muddy rope, that one could barely hold onto, while there wasn’t really any traction below your feet. At the top there was a big boulder we had to force, and with no grib it was almost impossible. Andrew went first, and secure a great video clip of him hanging halfway over the side, after he slipped and fell. He got up at last and helped me up first so I could then help Jack. They way down was even trickier, and provided many clumsy falls and slides. At some parts we acknowledged, that we could choose between going down voluntarily or by surprise, and sat down trying to keep our balance, while sliding down the mountain… It was hysterically funny. 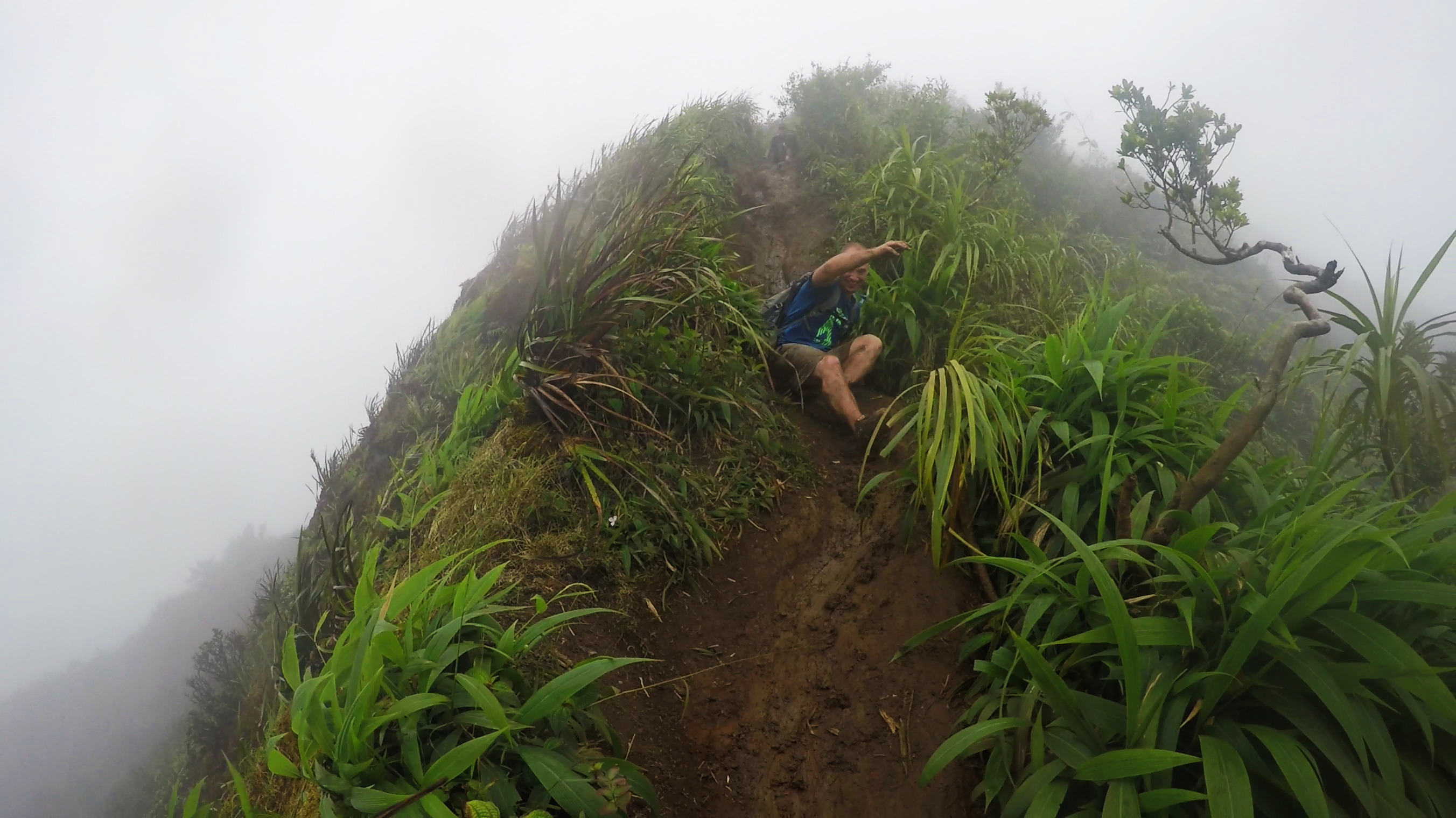 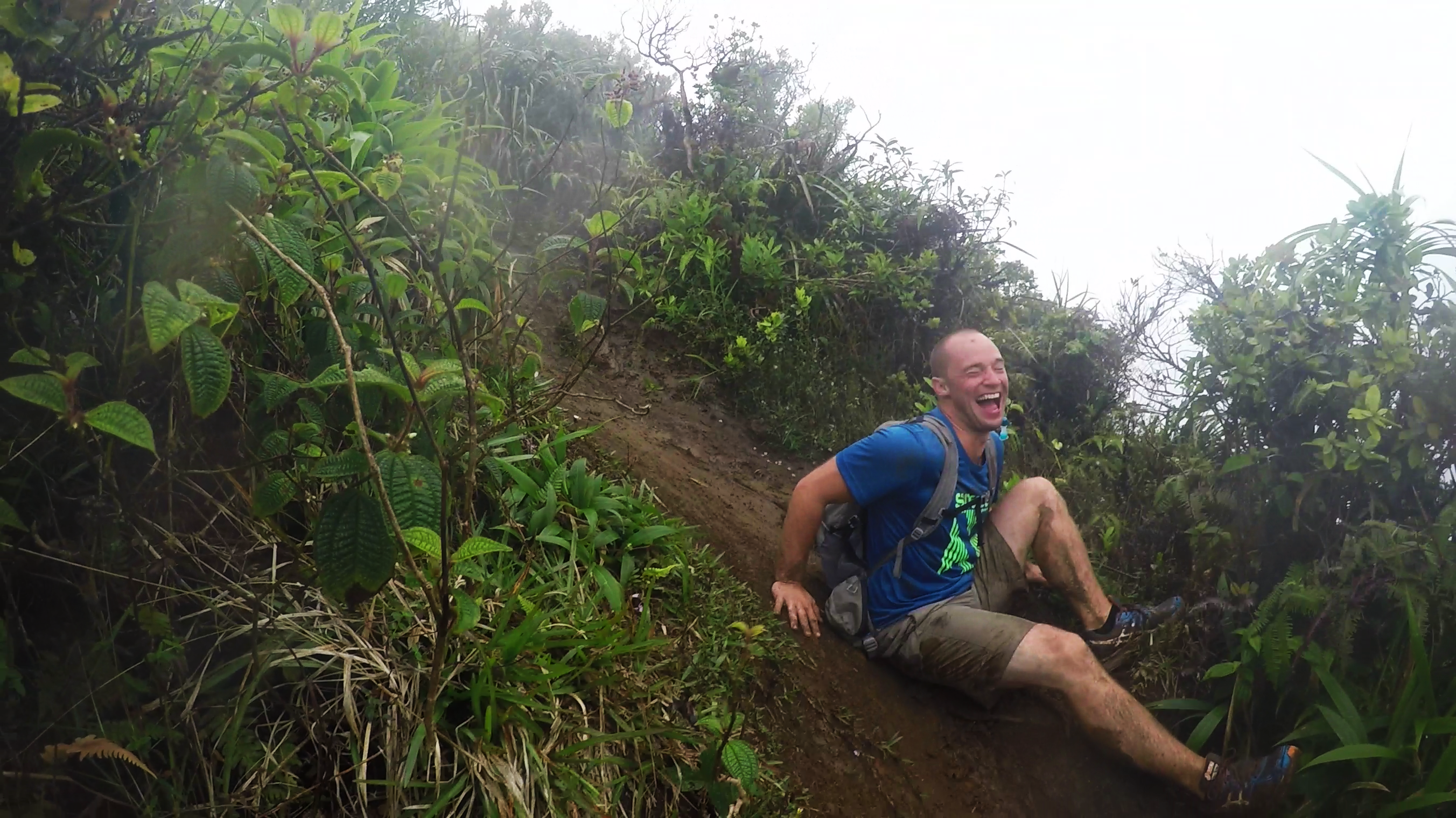 We had a bit of rain here and there, but we were now also so muddy that we had doubt that any taxi or bus would allow us in. We couldn’t get any more wet than we already were, and jumped in a river to wash off. The water didn’t matter much, as we got kind off a monsoon soon after for around 20 minutes time.
We had already decided we wanted another go at Stairway to Heaven or Haiku stairs and took a rest day. I went to our previous hostel to collect my phone and laptop chargers, and visit a nearby skate park. Hawaii is also a Tony Hawk’s Underground level, so I have been trying to visit some of the locations from the level to see if I recognize them. I couldn’t find it and had given up when I heard the sound of a skateboard below to freeway.

Besides that we didn’t do much that day. We shared some photos and video clips and went to bed early so we were ready for our hike the next morning. It was just amazing, and I had to write a seperate psot about it here: Haiku Stairs (Stairway to Heaven)

My trip is almost over now. The days are melting together and we are running out of time. Obviously we couldn’t not end our season as snowboarders in Hawaii without surfing, so we booked a lesson and tried it out. With a pair of gigantic beginner surf boards, a little push from the instructors when the right wave came, and relatively small ways it actually went pretty well. I got up standing the first time, and I got to surf on most the waves I tried. It it extremely hard work though, especially for the shoulders, that aren’t just to this much paddling. The instructors were plain surfer dudes, and talked and looked like surfers all the way. 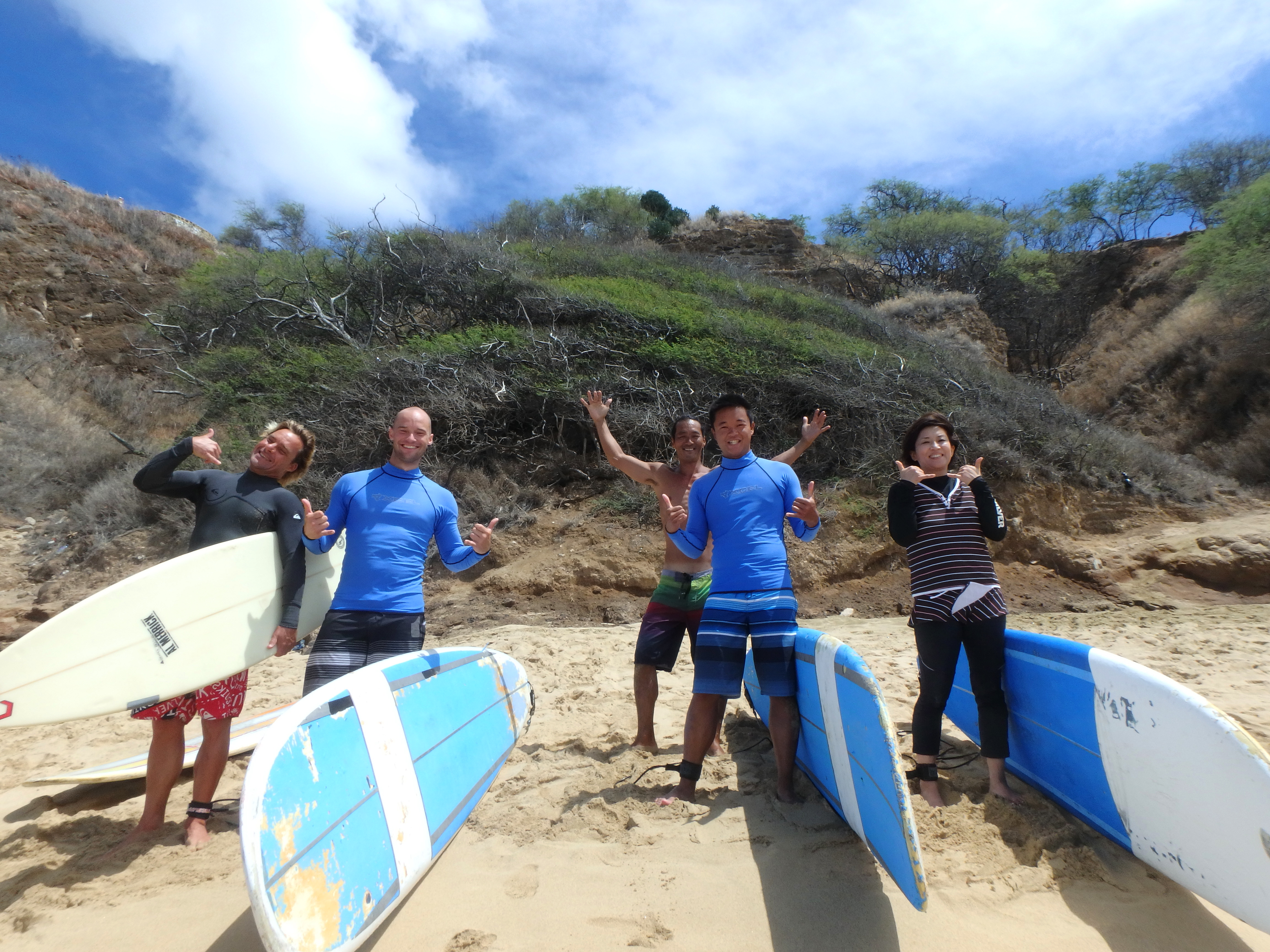 We found a tour with something called Good Vibe Tours that took us around the north coast for a very fair price. It was pretty casual with a young guy who took us climbing trees, snorkeling and swimming. The entire group (Andrew, I, our two Canadian roommates Rebecca and Simon, and two others from the hostel) were like children in the water, being tossed around by 2-3 meters tall waves. Our guide, Jost, was the worst. The waves and Pipeline Beach was enormous and broke in a way, that made it possible to surf or dive under but NOT stand in front of them, without being tipped over and flushed 5 meters onto shore. We were there for a while and had a blast. We finished off cliff jumping and watching the sunset in Waimea Bay. 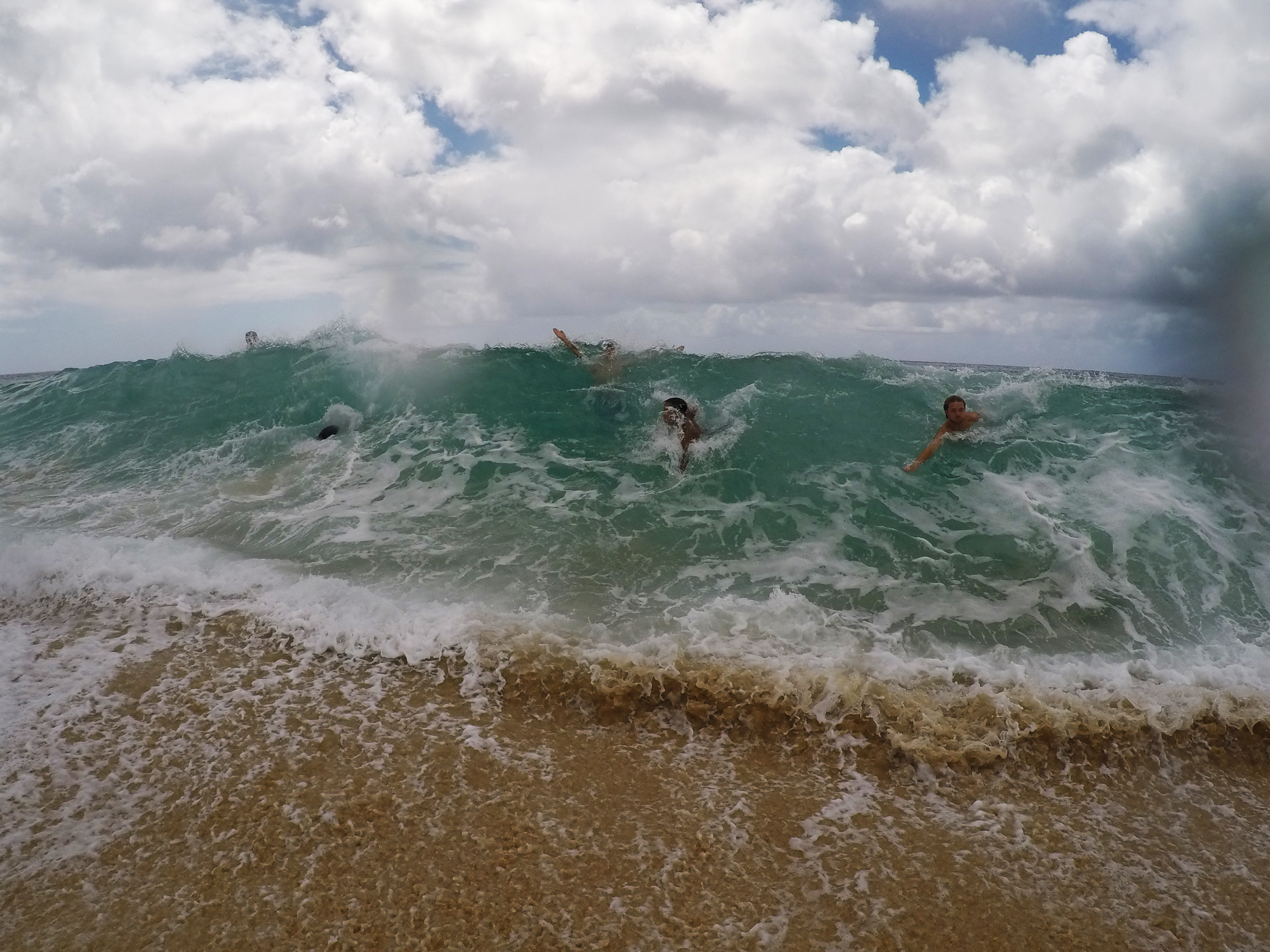 It was a long and great day, with a great opportunity to talk to like-minded local. We discussed if the birds had a death wish, since the keep walking on the roads instead of flying like proper birds, and found out that Jack Johnson lives in Hawaii. This tree is apparently from one of his album covers.

They day after was the last day in Hawaii. There was a long parade with reference to the 100 year anniversary of King Kamehameha. We watched it before giving surfing another try with Rebecca and Simon. The waves were somewhat bigger and the boards smaller. Also there was a tonne of surfesat Waikiki Beach, so the circumstances were difficult. We all got up more than once, but I had a struggle. It is a great feeling when you are up, but I’m not sure I feel it is worth the struggle when you have to paddle back out. Snowboarding is more my cup of tea. Andrew left that night, while I prepared to say goodbye to this paradise the day after. 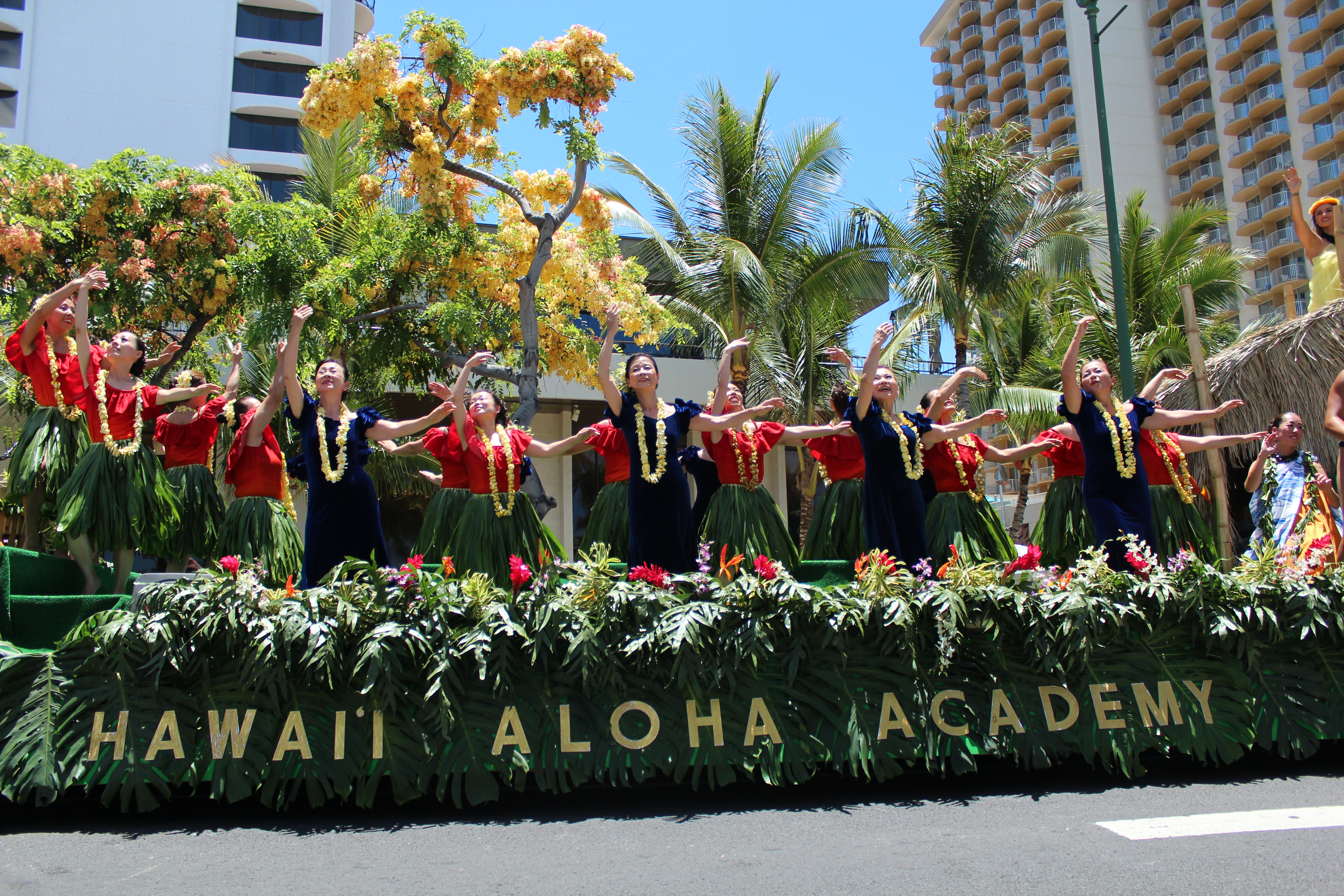