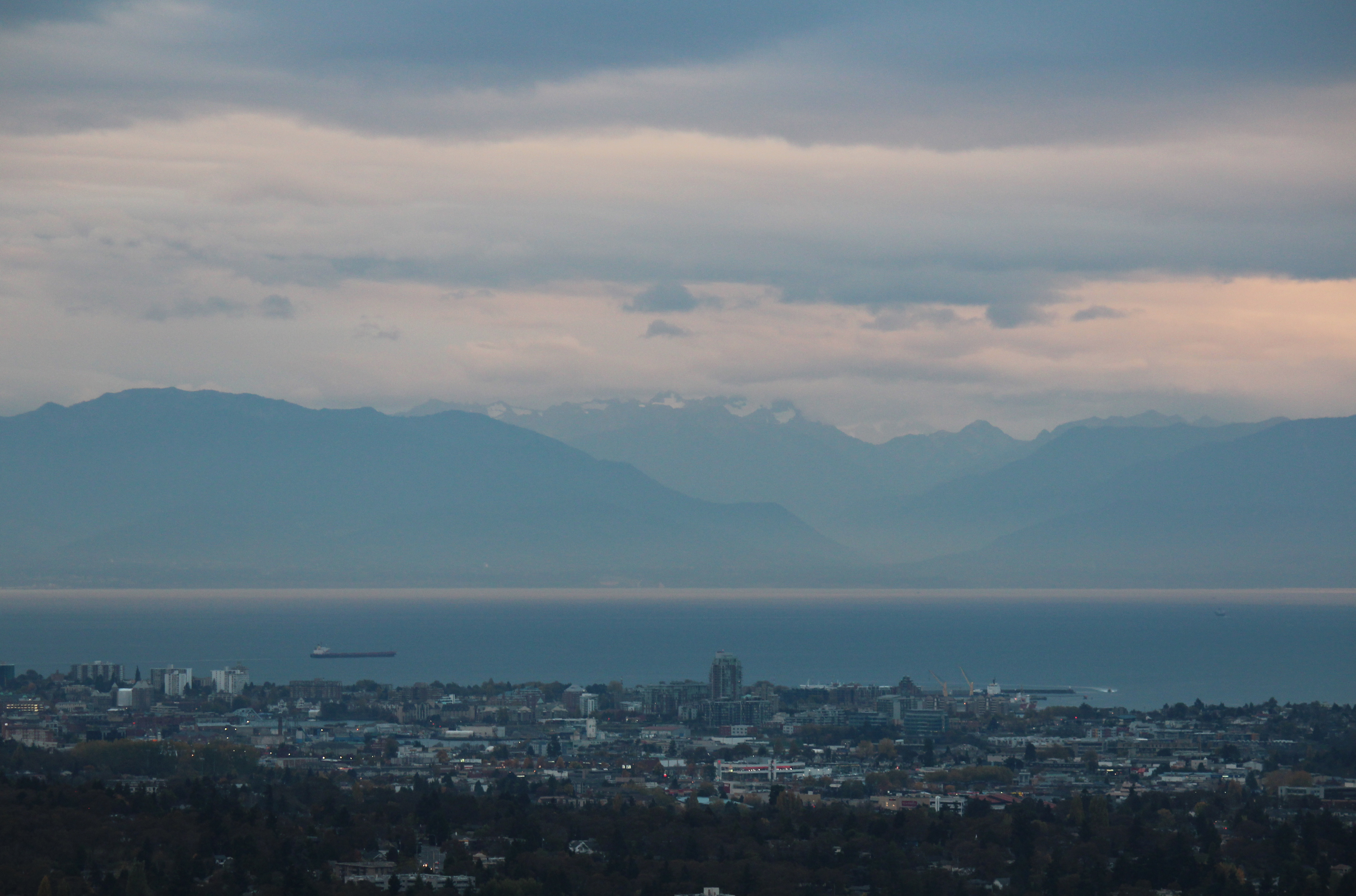 Friday I went to Vancouver Island to visit my friend, Maja.

This was where i realized how enormous this country is, even though it seems like this is just a small island just out from the coast. The Ferry was 1½-2 hours, and from there an hour by bus to Victoria.
Maja greeted me a the dock, and had me staying until Tuesday morning. Vancouver Island is surprisingly different from Vancouver. Everything is suddenly more America, with more McDonald’s restaurants, bigger cars (or trucks as they call it), and the classic halloween decorated American front yards and houses. Even so, in downtown Victoria it is obvious that the British once ruled here.

The first night in the Island was quiet. We had planned to visit some Norwegian girls and cook with them. That kinda went down the drain, so we went to the top of a rock and watched the sunset. Maja knew a sushi place, where we could eat for as little as 12 CAD each. Thinking about what groceries cost, it is no wonder no one cooks for them selves.

On saturday we got up early and met with Josefine, one of Majas friends, who had a car and drove us to China Beach and Mystic Beach. China Beach was covered in black sand and had a view over the Pacific Ocean and the mountains in Olympic National Park, Washington. On the beach we found bundles of these weird looking pipes, looking like an onion attached to a hose. Turned out that is how seaweed looks over here.

I wouldn’t want to swim into a bunch like that, even though they smell way less than the seaweed back home. The beach itself wasn’t very amazing, but the area in general was beautiful.

Afterwards we went to Mystic Beach via a 2 km long hilly path through the woods. Signage let us know that there supposedly were cougars and bears in the area. Unfortunately we didn’t see any animals. Yet it was a nice walk with rivers, falls and suspension bridges.

Sunday we went for a hike up Mt. Douglas, a 260 m tall hill by the water. While we were at the top, the sun set and it started to get dark. It was very beautiful, but also gave us a bit of trouble in the decent, as we couldn’t see a thing. Ironically we didn’t see any animals in the hill except for peoples dogs. However, on the walk through the neighborhood on the way home, a deer always scared me to death – didn’t see it standing on someones lawn right next to me.

Monday morning was a school day. Maja went to the university, and I got my exam assignment. That meant we started our hike a bit late. On top of that our bus did not show up, so it was late before we made in to Goldstream Provincial Park. There was still daylight when we got to the water hole, and we took off our shoes and crossed it. It became dark fast, and the uneven and slippery terrain was constantly threatening us with strained ankles. Vi faced the darkness, and walked 9 km to see Niagra Falls (not that Niagra Falls). It was a tiny clearing in the forest after a long narrow tunnel under the highway. There were steep rocks and trees on both sides, and we both agreed on going back quickly – we wouldn’t want to meet any wild animals right there in the dark.

The best part have got to be on the way back, when we both used our phones as flashlights, and tried to look down and see where we were going. My relatively short body kept going forward unhindered, but Majas 10 cm taller forehead didn’t make it under the highway sign I just passed, and it forced her to the ground. Luckily she is tough, and laughed her ass off over the next few hundred meters.
Unfortunately I just packed my camera away 🙁

In this moment I am on my way back to Vancouver for a couple more days, before I am off to Whistler, where they have just launched the snow canons.
Thanks to Maja for a great extended weekend on Vancouver Island, and to her roommate Henriette for house me for a few days.

One week before departure