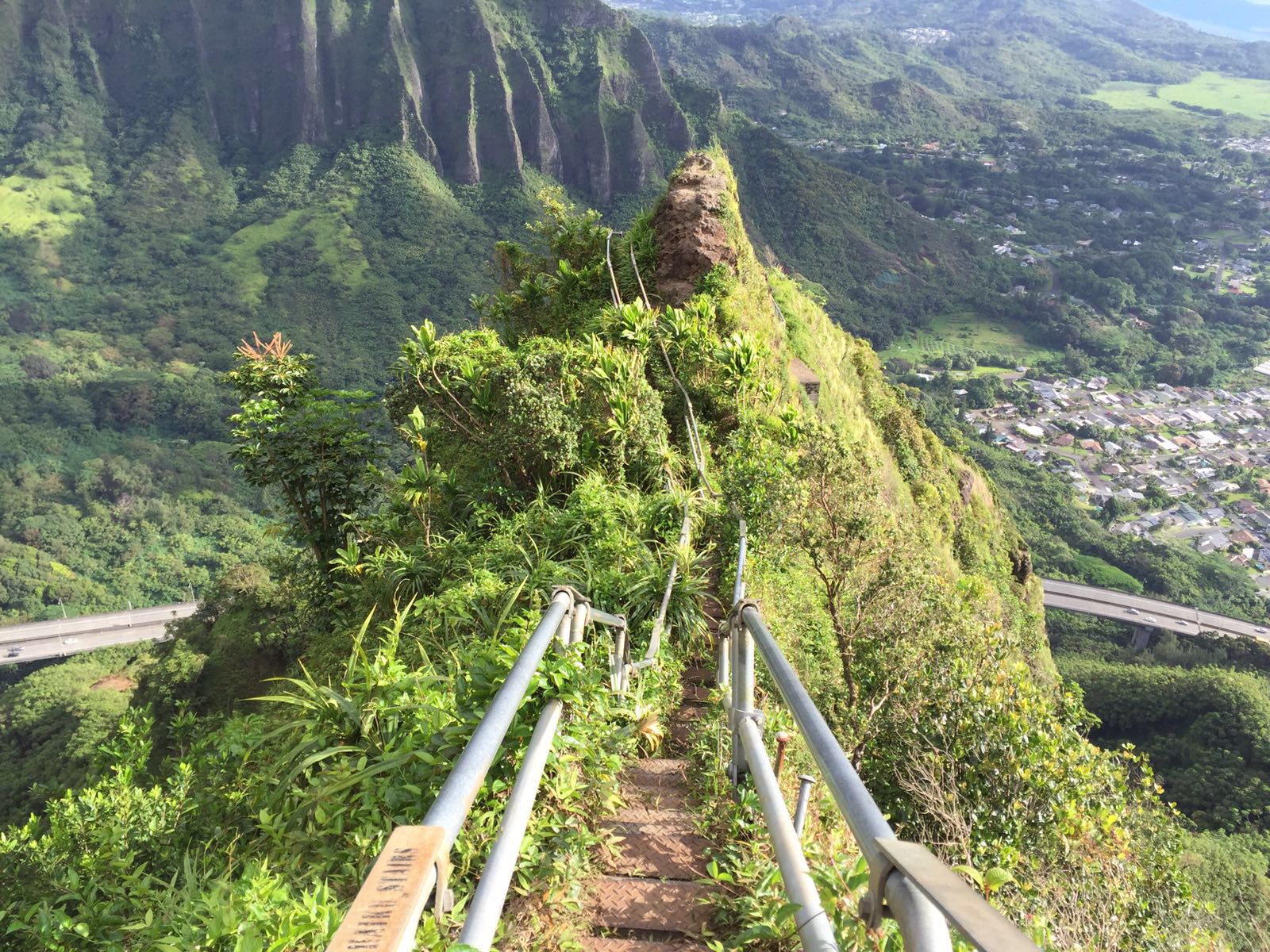 Today we tried Haiku Stairs again. I found Haiku Stairs or “Stairway to Heaven” on Instagram in early spring, and both Andy and I have been wanting to go there ever since. Therefore we were a bit disappointed when we found out, that it has been off limits since the early 80’s. That means there is a guard at the beginning of the hike at most hours, and that the police stop by from time to time. Nevertheless there are hikers on the trail every day. With our previous experiences and two new partners, it was time to try again.

We got up at 4 am to get past neighbours and the guard before the sun was up. We got there by Uber, and apparently the driver had been the 4 times before, so he gave us a few last minutes advice. We parked in front of the first big gate and ignored the signs saying “private property – no trespassing” and snuck into to woods the get around the gate. We only just crossed past the fence, when one of the neighbours shouted at u: “You are trespassing! I will call the guard and the police!”. He had a huge flashlight (well, then we could see) and filmed us. Those neighbours are a but crazy, and we continued as discretely as we could, trying not disturb anyone.
We walked along the road in the dark without saying a word, before heading intro the trees again, and met 3 others on their way up. We helped each other under the fence to where the guard sat in his car either sleeping or not caring. That was a big difference from last time – we read that the guard could not detain or give us fines, and all our research led us to think, that they wouldn’t try either. We didn’t have any troubles, and walked undisturbed to the bottom of the stairs and around the last fence. 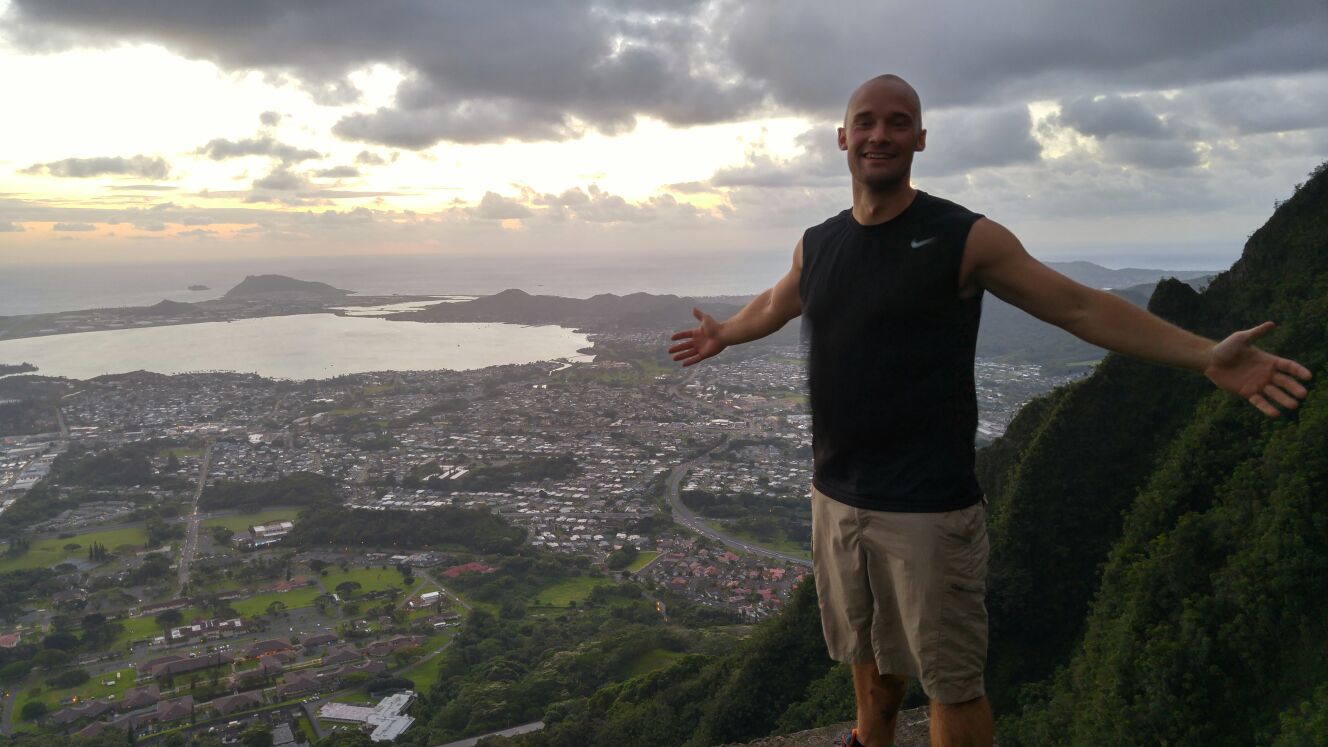 From here it was 3.922 step into heaven. Our timing was perfect, cause it got brighter and brighter as we started climbing Stairway to Heaven, and soon we were climbing almost vertically, while looking over the freeway, Honolulu, that started waking up and turning on the lights, and the orange sky over the Pacific Ocean. We made it to the first plateau, where we watched the sun rise above the horizon and hide behind a cloud. And also we could look over both sides and see how far up we had gone, and how steep the climb had been. We kept going, and from here the climb was only easier and more beautiful. We already met a group that had started even earlier, and now were coming down. We also met a guy aged 32, who had climbed the stairs at least 20 times (with no trouble with the police: comforting) and 4 dolls. All 5 we were seeing more of later on… More on that in the end.

We were all very concentrated and careful not to miss a step, especially on the more or less vertical patches. I wouldn’t stay the hike is exactly dangerous. A fall at the wrong place could be fatal, and possibly not just for the one who falls, but also for anyone directly beneath him or her. On the other hand: The steps were pretty good with fine handrails, so being careful and in good shape, and don’t see why you would fall. I do think our hike at Ka’au Crater was worse than this one. Dangerous or not, we tried to remember to stop once in a while, and turn our heads to enjoy the view, and be amazed by how the stairs winded along the rim.

At seven in the morning we reached the summit, and could enjoy the view and shoot our photos, but started our decent soon after as bad weather was coming in. It was also pretty cold and windy at the top. The 4 dolls took a billion photos and drank champagne and were acting like crazy teenage girls, on a level that was just not irritating and mostly entertaining. The guy from earlier gathered a big bag of garbage, that he carried all the way down. I take my hat of for him for being able to do that, and for the rest of Friends of Haiku Stairs for their work. And to anyone wishing to go there: Please show respect to the mountain and the neighbours. Be quite and take home your trash, please. 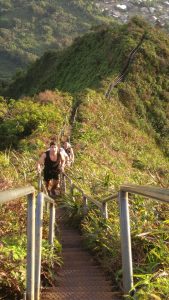 We descended to the first platform, from where we had a free view all the way down to the guard in his guard. At that time he had a visit from 2 cop cars, so we decided to take a break before heading down. Marko saw the cars in the background on a picture from 20 minutes earlier, so they had been there a while, and drove off soon after. Then we, the guy with the trash and the 3 guys we met in the dark earlier, moved down towards the guard again. He saw us long before, and stepped out of his car as we approached him. “I called the police 25 minutes ago, so they will be here before long. If they spot you anywhere in the area, you will be fined $1.000, so I would hurry up if I were you.” He was all down to earth, and suggested that we crawled out under the fence the same way we came in. 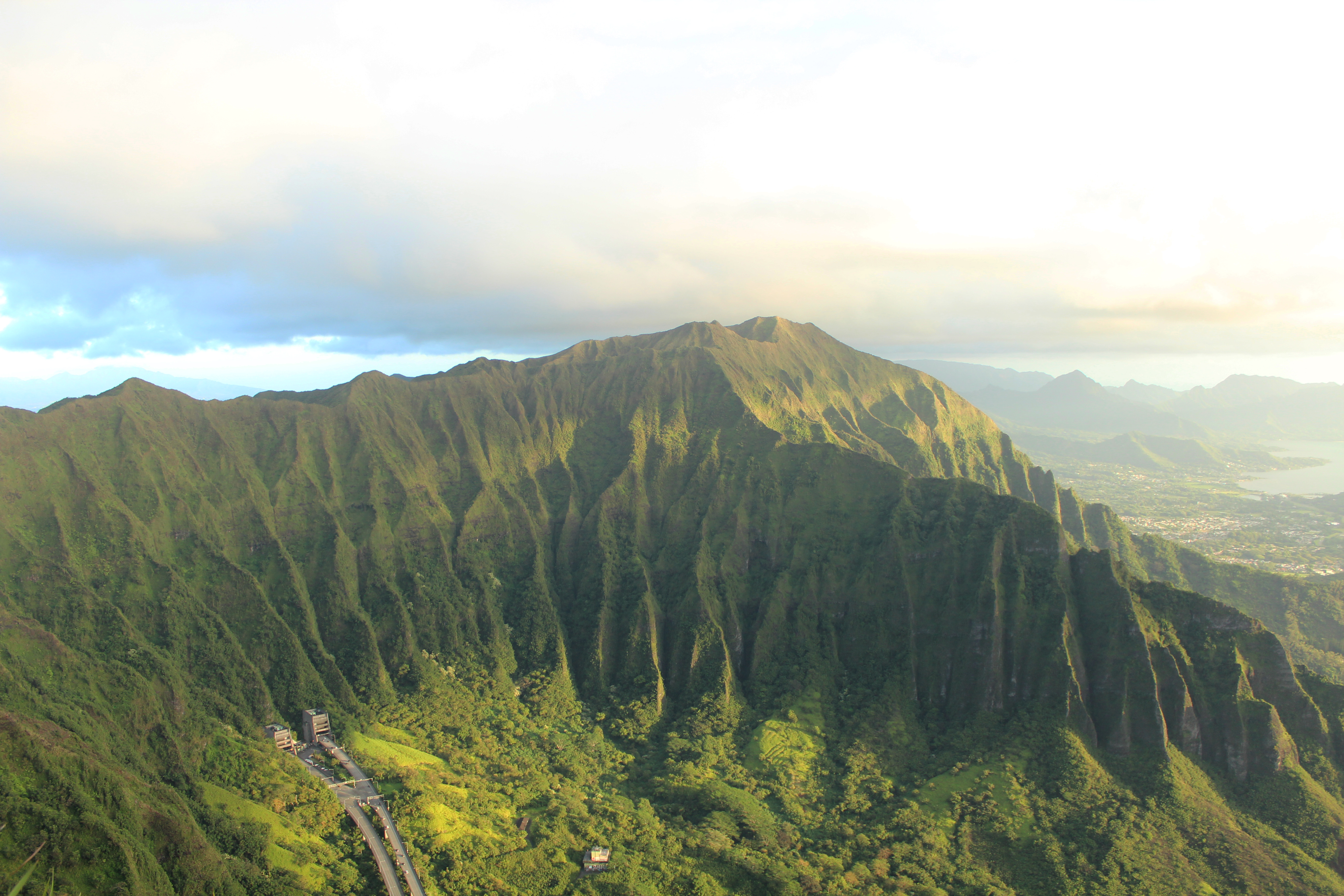 From here we tried to go unnoticed, and hid every time we saw or heard a vehicle. Andrew, Marko and Gonzalo got separated from me somehow, so I went with the three others. We chose to go through the bamboo forrest as much as we could, and bumped into Marko and Gonzalo again – no Andrew. As we stepped out of the bamboo forrest and had only 200 meters to the gate, we ran into the trash guy and the 4 girls again. The casually strolled down the street, and laughed a bit at our strategy.
We got out, and the three guys were picked up by their dad. We kept walking while discussing how we got home and how to find Andrew. The 5 others fell behind. Suddenly they came running out towards the guys pickup truck. They said something, and we just caught “just get in the back of the truck!”. As he knew the area and had been calm up until now, we didn’t ask any questions, and jumped onto the back of the truck with the girls (this is actually legal in Hawaii), and drove off. The girls still had their car parked in the neighborhood, so we drove to the drivers work place, changed to another pickup and drove back. He and his mate was craftsmen, and was working on some pretty great houses by the water, so they gave us a tour in their almost done luxury villa.

That was action enough for now, so we hopped on a bus and went back to the hostel. 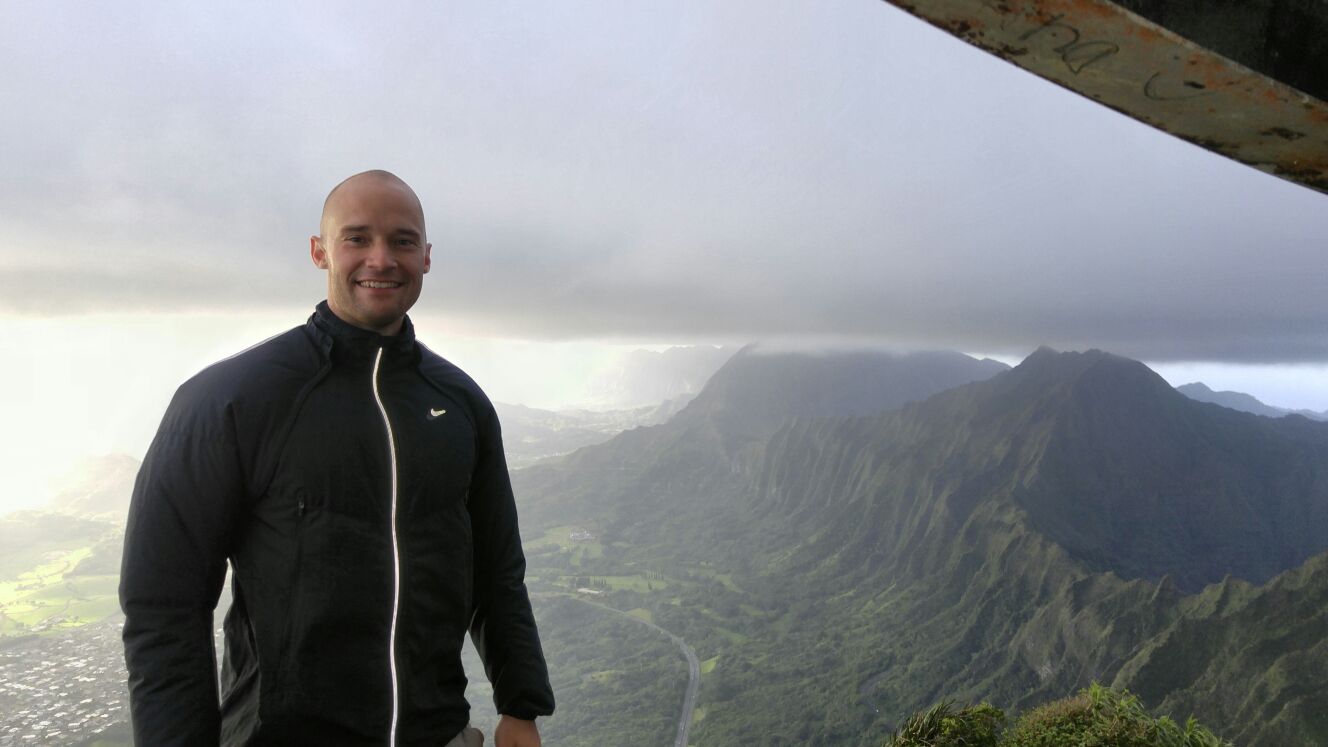 Oh and… Andrew… He, Marko and Gonzalo had taken cover in the forrest, and Andrew went in a lot deeper. It was a troublesome path he chose, and he came out an hour later than us, and met us at the hostel after lunch. None of us got in trouble with the guard or the police 🙂

How to get to Haiku Stairs (Stairway to Heaven)