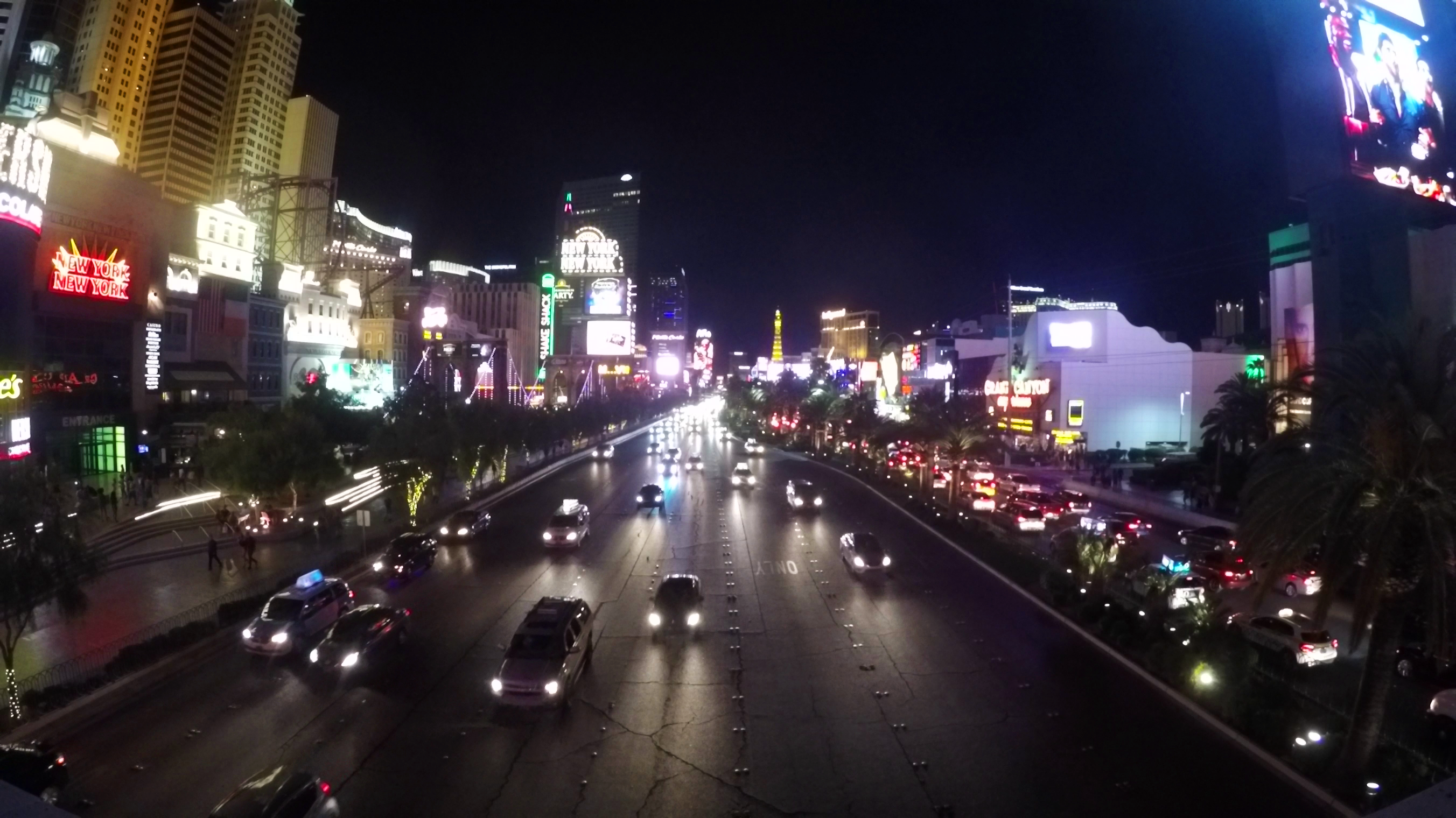 In Hollywood we shared a room with two guy (John, South African from Florida and Connan, South African from Qatar), who turned out to have booked the same hostel as we had in Las Vegas. We hit it off in LA, and decided to drive through the Mojave Desert together. It was not a very eventful drive, as we all went to a limo party the night before, so we spent some of the drive catching up on some sleep. I think the highlight were the gigantic solar power plant in the middle of the desert, and a road sign guiding travelers towards Zzyzx Road (What the hell!?)

We arrived around around 4 pm, and returned the car in downtown Las Vegas (Fremont, the original but smaller Las Vegas), and strolled around Fremont Street. It had hotels, casinos, scenes, bars and half naked women everywhere. We found a nice seafood buffet for just 22 dollars, and were pretty excited about it. Seafood was everything from 30 cm long crab legs and oysters, to delicious sushi. Seafood was just the theme of the day, so there was the daily options of Italian, Thai, Chinese and what not – and of course American, which was basically the same just fried ^^. Turned out that these kinds of buffets are very common in Vegas (heaven on earth). After dinner we rolled out of the restaurant to Fremont Street, and discovered that the overhead grid over the street was not a shade, but a giant LED screen. The psychedelic shapes and colors in the sky, made everyone stop and look straight op. The three others went out for drinks, but I decided to head home and relax. I think the plan was to go to The Stratosphere nearby, have a few drinks and gamble a bit – not surprisingly nobody was home until 6 am.

I woke well earlier than the others, and spend some time in the outlet center, before heading back to relax in the sun. We had tickets for Cirque du Soleil in the evening, that also gave us coupons from another buffet – this time with complimentary beer and wine. It stroke me as ironic, that we had just come from LA “the entertainment capital”, and now in Las Vegas there were so many shows every single day. 3 different Cirque du Soleil shows, Chris Angel, David Copperfield, Blue Man Group, Celine Dion, pool parties with DJ’s like Skrillex and David Guetta just to mention a few.

We walked past Cesar’s Palace to check it out, and were amazed by how ridiculously huge it was. It took ages to just walk past, and then we realized that we only walked past their shopping area, and now there was even more buildings with casinos and the hotel. We went into one of the less fancy casinos to play blackjack. I put down 20 $ on the table, and in a short time I doubled it. From then it was steady for some time, while getting free drinks as long as we sat at the table. At 6 am we walked home, and I cashed out my 20 $ I started out with. Not a bad start.

The next day we were all a bit tired, and as it was sunny and 29 degree celsius, it seemed obvious to just sit outside with a book, watch a few episodes of Agents of S.H.I.E.L.D, and book tickets for a pool party in the evening. Las Vegas is an absurd community, and your daily routines are stripped away at once. It is always hot, everything is always open and you are never alone in the casino. That meant we didn’t get anything to eat that day, and once people crawled out of their hostel rooms at started partying, it hit us hard. We had a great time, and Connan made sure my new nickname “Denmark” was carried on from LA.
We made it to the Skrillex pool party and had a great night i both the pool and on the dance floor, even though Connan didn’t even remembered leaving Hostel Cat.

On the fourth day the energy was running low, and Andrew and I were happy it wasn’t us who had to catch a plane at 10 am. It was another slow morning, and in the evening we went on a casino crawl. We took an Uber to the farthest end of The Strip, and walked home from there through one ginormous casino after the other. We played a bit of blackjack here and there, and even won a bit of money. Andrew as + $40 after the first casino and I was + $5. Of course that turned over, and we both lost our winning and some more. But losing $30-50 in 4 days in Las Vegas is almost a win…

The last two days in Las Vegas was spend outdoors i Death Valley and at Grand Canyon. Both gave us the feeling of just how big the world is. In Death Valley we could see and drive incredibly far without seeing anything – completely deserted. Badwater in Death Valley is also one of the warmest places on earth. 85,5 metres below sea level there is no breeze, and rarely ever any shade. According to some sources, the highest ever measured temperature on earth, was measured in Death Valley as high as 56,7 degrees celsius (134 fahrenheit). We were spared with a peak temperature of just 42 degrees (108 fahrenheit). There aren’t many tall tales from here, so I will let the pictures speak for themselves.

I realized I have started to miss the rain. We haven’t had rain for a month. The sound of the rain on the windows strike me as cozy, and the cooling effect is very desirable at the moment.

New York – Concrete Jungle where dreams are made of